Angola – Salesian presence in Lixeira district, alongside the young
Featured 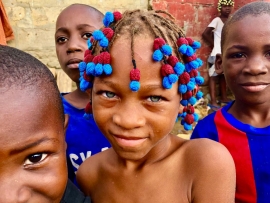 After the years of the bloody civil war, today Angola is one of the African countries with the highest rate of economic development. But the economic and social contrasts, when visiting a developing country, are always present. In Luanda, the downtown skyline is a succession of glittering skyscrapers, but it is enough to reach the outskirts to see a very different story.

In one of these outlying districts, there is one of the most important Salesian centers, that is, in Lixeira, once the Luanda landfill, while today it is a populated area of more than 250,000 people who live in makeshift homes and in the perennial search for food to eat.

This is where the Salesian school arises. Every day, it welcomes 6000 students, from primary to secondary school, which then gives access to the university. At the central branch, the students succeed each other in three shifts as there are not enough classrooms for everyone. The youngest start at 7:30 am; in the afternoon, there are the students of middle school; the high school students finish at 10.30 pm: in sum, every five hours, thousands of kids take turns to study at the same school desks.

In addition to the school, there is a health center managed by two sisters and a nursery for the little ones. There is also vocational training for young people who want to learn a trade, plus areas offering a network of social solidarity for the benefit of street children, and a huge parish, with five chapels located in the most distant districts, where over 5000 children attend catechesis.

Unfortunately, for some children who have learned to make do on their own, it is not easy to approach education and follow the rules, but the Salesians in Lixeira continue inviting young people to "be with Don Bosco", abandon life in the streets, so as to be welcomed and be prepared for a better future.