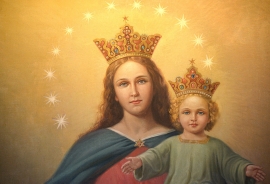 (ANS - Brasilia) - Mary Help of Christians, celebrated by the Church on May 24, was a central figure in the life of Don Bosco and indicated by him as the patroness of the Salesian Family.

In May, the Salesian Family lives a traditional devotion, originating in the time of Don Bosco, which is the memory of Mary invoked with the title of "Help of Christians." In the midst of so many difficulties and challenges, so many acts of violence and wars that mark human history, Christians still experience and testify to Mary's concrete help in daily life. She is the principal patron of the Salesian Family, because in the task of evangelization and human promotion, Mary shines as a star and a model of pastoral charity

The original invocation with the Latin title "Auxilium Christianorum" is linked to the great Pope St. Pius V (1566-1572) who entrusted the fate of Christianity to Mary, and who after the victory at Lepanto, which stopped the Muslim expansion, decided to also insert the invocation "Auxilium Christianorum" in the Lauretan Litany. Furthermore, Mary Help of Christians was again invoked in 1683 when the European forces, against all odds, stopped the Turkish armies at the gates of Vienna. Finally, the feast of Mary Help of Christians was established by Pope Pius VII on 24 May 1815 as a sign of gratitude to the Virgin, after the pontiff, imprisoned by the French emperor Napoleon Bonaparte, obtained his longed-for freedom.

From the beginning, Don Bosco placed his work under the protection of Mary. The Virgin indicated to him his field of action among the young, and she guided and supported him. In 1862, Don Bosco confided to the young Giovanni Cagliero: "Mary wants us to venerate her with the title of 'Mary Help of Christians.' The times are sad and we need the Holy Virgin to help us defend the Christian faith. We shall build a church that is large and worthy of the Virgin.”

Without resources, but convinced that "it is Mary who wants the Church and will find a way to pay for it", Don Bosco set out to build it. On 9 June 1868, the new church was consecrated, which today is the Basilica of Mary Help of Christians.

Those who visit that basilica can see the great painting conceived by Don Bosco. The image of the Help of Christians is different from those made in Europe up to that time. For Don Bosco, Mary was not the armed warrior, ready to take down her enemies, nor a cold queen, richly dressed. Don Bosco developed a "positive" idea: the arms of Mary and her son Jesus are open and tense, her serene face transforms her into a friendly queen, maternally present and affectionate.

Thus Don Bosco described the painting, painted by Tommaso Lorenzone: "The Virgin Mary appears surrounded by a sea of light and majesty. Angels surround her and give her gifts, as their queen. With her right hand she holds the scepter which is a symbol of her power, with the left she supports the Child who has open arms, thus offering thanks and His mercy to those who resort to His august Mother. Next to and below are the holy Apostles and Evangelists, who look to the Holy Virgin. The setting: the city of Turin, with the Sanctuary of Valdocco in the foreground and Superga in the background.”