Ecuador – Andean and Amazonian missionaries work together for the mission
Featured 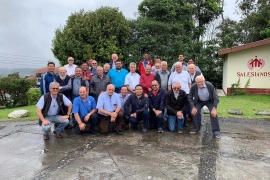 (ANS - Macas) - The Youth House of Macas was the site of an event that does not happen very often: the gathering in one place of Salesian missionaries from the Andes with those of the Amazon, which is what happened from May 13 - 15, to share a fraternal space for formation and reflection on missionary praxis.

Fr Wladimir Acosta, Delegate for Salesian Youth Ministry in the Province of Ecuador, was in charge of the event. It began on Monday with Lectio Divina and a talk with Fr Francisco Sánchez, Provincial of Ecuador, who then closed the first day with Vespers and the Eucharistic celebration. Also present on the occasion was Mgr. Néstor Montesdeoca, SDB, bishop of the Apostolic Vicariate of Méndez.

On Tuesday, they proceeded with an analysis of the situation of young indigenous people, curated by Professor Gabriela Bernal, from the Central University of Ecuador, who has been researching this reality for several years. The Professor said that the world had changed substantially in recent decades and that these transformations had had a direct impact on the way young indigenous people were.

“In these changes, the first element is linked to the new Information and Communication Technologies, which reach even the most remote places, and the second to the communication networks that have expanded in the last decade, such as the construction of roads and highways , which shortened the distance between the countryside and the city," explained Professor Bernal, adding that in this new dynamic young people lived and perceived reality differently than in the past.

Faced with these new scenarios, Prof Bernal said that the greatest challenge for the Salesians was not to abandon their pastoral activity in the rural environment and to put aside any fear of the urban environment as the young indigenous were in constant transition from the rural to the urban world - and vice versa - for family, study or other reasons.

"It is important that the Salesians think of appropriate pastoral guidelines to accompany young people in these two areas; broaden their perspective to understand that young people in rural areas will necessarily connect with the urban world, but also that young indigenous people in the city maintain their link with the countryside, as a profound nuclei of themselves, to continue to feel indigenous," concluded Prof Bernal.

After her presentation, Fr Acosta addressed the theme: "Being itinerant: reality and challenges";  working in groups, all those present then reflected on the elements proposed to seek new proposals in this pastoral sector.