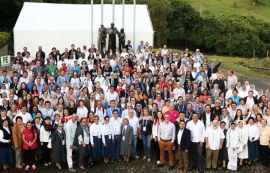 (ANS - Brasilia) - This month of May 2019 marked the 25th anniversary of the Salesian Schools Network of America (ESA), initiated by the Salesians (SDB) and the Daughters of Mary Help of Christians (FMA).

The first continental meeting of the Salesian schools took place in Cumbayá - Quito (Ecuador) from 15 to 25 May 1994. Convened by Fr Luc Van Looy, SDB, and Sr. Georgina McPake, then Councilors General for Youth Ministry of SDB and FMA respectively, they brought together 117 delegates, who lived that event as a response to the signs of new times, trying to unite the forces of the Salesian Family to better articulate educational activities throughout the continent via an initiative known as the Salesian School in America (ESA, in Spanish).

In 25 years that process has been structured at continental, regional, national and provincial levels. The options and operational directives have guided the Salesian school in the countries involved and have become a reference point for educational and pastoral actions. With the participation of its directors, a common reflection developed, which generated projects and aids to accompany the process lived in every reality and country with pedagogical itineraries to inculturate the Don Bosco Preventive System in the different American contexts.

After Cumbayá 1, in 1994, Cumbayá 2 came in 2001, with the presence of 250 participants, who affirmed: “As a Salesian Family, faithful to the charism of Don Bosco, we opt for a School and a Center for Vocational Training in solidarity, present in the reality of young people, where reciprocity is lived, inclusive, which educates to the socio-political dimension and develops an educational proposal that is part of an active citizenship, giving meaningful answers to the different forms of poverty.”

The third and fourth meeting then took place in Brasilia in 2008 with the theme: "Rediscovering the educational proposal of the Salesian School in America in its intercultural context", and in Medellín, Colombia, in 2017, with an invitation to "study the new educational and pastoral strategies of greater impact and the growth potential of ESA in the coming years."

Over the years, ESA has also been enriched and strengthened thanks to the charismatic contribution of several other groups of the Salesian Family: Daughters of the Divine Savior (HDS), Daughters of the Sacred Hearts of Jesus and Mary (HHSSCC) and “Damas Salesianas” (ADS) , which animate many other educational institutions.

The living reality of the Salesian School in America - with its meetings, the policies undertaken, the directives and the indicators - has been and remains a source of inspiration and stimulus for all the schools of the Salesian Family.