D.R Congo - "How is it possible we've become so indifferent to drug use by street children?"
Featured 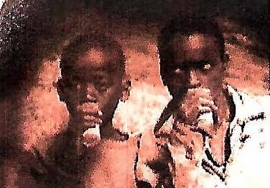 (ANS - Lubumbashi) - A simple walk along the main streets of Lubumbashi has one see a phenomenon that is simply shocking: the massive presence of minors, male and female, who wander about here and there. But what are they doing in the streets? Why does the street replace the family today?

Many causes are already known: divorce of parents, lack of education, the phenomenon of "child sorcerers", family abuse, poverty, bad company ... But when the family loses its true role, the street welcomes them with open arms.

The road is inappropriate for them, who do not there acquire the education they should receive, and where the children are instead exposed to all possible kinds of negative or anti-values. Yet the street pays. All the children who arrive find a good welcome, despite the usually difficult and tormented beginnings. Once inside this world of the streets, they have trouble leaving it. Many people pity the children and are willing to help them, but that charity does not help them leave the street, but rather, it makes their stay even more stable.

The situation is even worse for females - girls and teens - who easily end up in prostitution from the age of 8, and are subject to psychological and physical traumas that will mark them forever.

As for drugs, almost 95% of street children use them in some form or other. What is most striking is the consumption of glue – like from petrol or lacquers. Many children always run around with a small bottle in their hands: it is the glue they inhale all day; girls and boys, all together. When asked why, most said they wanted to be more lucid, that they didn't want to think about being ashamed for having to beg or have the strength to work or face the day's “storms”. While for girls, it is, above all, to be able to accept the man, the client whoever he is, and whatever his age.

Inhalation of glue also generates dependence and involves all the problems of the other substances: inability to control its use, leads to other stronger substances, seriously deleterious effects on the brain and neurotransmitters...

We will never tire of saying it: a child's place is in a family and not in the street.

The Salesians in the Democratic Republic of Congo are working hard to provide a way out off the streets to street children. Thanks also to the support of other realities, such as the "Samu Social Bakania-Ville", the Salesian network "Opere Mamma Margherita" places it efforts in meeting children on the streets, two nights a week, and offer them paths to recovery and social reintegration.