RMG – At the heart of Salesian Charism
Featured 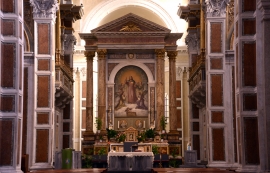 (ANS - Rome) - Under the painting of the Sacred Heart, in the center of the Basilica built by Don Bosco in its honor in Rome, there is a double portrait. The first is dedicated to St. Francis de Sales, the second to St. Marguerite-Marie Alacoque, from whom devotion to the Sacred Heart began, after the revelations she received from December 1673. Francis de Sales had founded with Saint Jeanne-Françoise de Chantal the Order of the Visitation, to which Marguerite-Marie Alacoque belonged. It is not just a question of historical references.

The heart is like the synthesis of the message of Francis de Sales, communicated with his life even before his writings.

Francis was able to enrich the Church's journey with a charitable love without boundaries. It is the result of a maturation begun during the years of study and then continued in the 9 years as a priest, of which 7 lived as a missionary in the Chiablese area, facing hostility of all kinds. His strategy was: to reconquer hearts one by one, with patience and sweetness. The same approach he maintained as a bishop: "God pulled me away from myself to take me for Him and give myself to the people. That is, He transformed me from what I was for myself to what I had to be for them," he wrote in a letter to Jeanne-Françoise de Chantal on the day of his episcopal ordination.

The "heart" is the whole of his entire life and his spiritual heritage, from which also comes the gift that, through Marguerite-Marie Alacoque, has reached the whole Church.

Don Bosco's spiritual history is like a big tree that comes from the same root. He wanted Francis of Sales to enter the name of those who would continue his mission because it is the same heart that gives life to everything that was born from Don Bosco.

Two particular moments are like a testament and symbol of Don Bosco's heart, both of which lived at the Basilica of the Sacred Heart. The letter from Rome in May 1884, where he confides everything that is most dear to him and asks his Salesians to have the same heart that he has for young people; and the only Mass he celebrated in the Basilica, on 16 May 1887, when he allowed the whole journey of his life to emerge from the memory of the heart, lived as "the only movement of charity towards God and towards his brothers" (C. 3).

Returning to these roots opens the way to a path of renewal, which recreates the 'new heart', with which to be SALESIANS, according to Don Bosco's heart, for today's young people.