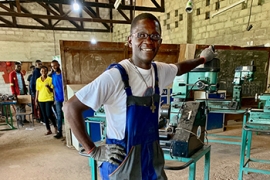 (ANS - Brazzaville) - The Republic of Congo was, until its independence in 1960, the ancient colony of the French Congo. Today it is a small country in central Africa with about 6 million inhabitants, mainly located along the Congo river and on the shores of the Atlantic Ocean. It is a country, like its almost homonymous neighbor - the Democratic Republic of the Congo - with many young people and a great deal of poverty. It is therefore a country in which the spiritual Sons of Don Bosco cannot but be present.

In the Republic of Congo the Salesians have been present since the country's independence and today they count three centers. The first center was established in Pointe Noire, the nation's commercial capital, and was canonically erected in 1964. In this large city, endowed with its vast port on the ocean and rich in oil resources, the presence of youth is significant. For this reason the Salesians have structured the center, dedicated to St. Peter, so that it can satisfy a large number of needs: it houses the parish, a youth oratory, a Vocational Training Center, the primary and secondary school, a boarding school, a shelter for young people in difficulty and pastoral care in prisons.

The other two Salesian works in the country instead arise in the political capital, Brazzaville, and are named after Don Bosco and a very popular saint in Africa, St. Charles Lwanga, a Ugandan martyr.

In the center dedicated to Don Bosco, canonically erected in 1992, the Salesians animate another Vocational Training Center, attended by 700 students who, thanks to two-year and three-year courses, qualify in the sectors: electrical, automotive mechanics, welding and lathing, carpentry and air conditioning installations. This center also includes Fr Marc Abumba Kizeji, 35, who met the Salesians in Lubumbashi attending graduate school of mechanics and then, after being ordained a priest, was in charge of coordinating the vocational sectors of the training centers present throughout the Congo.

In the house dedicated to St. Charles Lwanga, erected in 1975, there is a parish and next to it a primary and secondary school, attended by 900 children, teens and young people. Unfortunately, in this school there are no more classrooms to accommodate all the children who want to attend it, and indeed, already does double shifts, in the morning and in the afternoon, to serve as many minors as possible.

However, in the future, the Salesians hope to be able to further expand the classrooms and the educational offer, trusting in Providence and international solidarity.