Nigeria – A country in search of peace and reconciliation
Featured 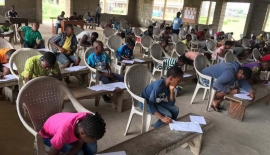 (ANS - Abuja) – For years Nigeria has been the scene of clashes and combat. According to the Foundation "Aid to the Church in Need", based on international analysis, religious clashes have caused over 20,000 deaths, more than two million refugees, millions of people dependent on humanitarian aid, with thousands of women and young people kidnapped, enslaved or forcibly recruited for military and terrorist attacks. Conflicts have been tearing apart this West African country for far too long, where every ordinary citizen seek nothing but peace.

"The level of insecurity in Nigeria is unprecedented and we must not remain silent while some people sow chaos in the rest of the nation in complete impunity." It is the grave and heartfelt appeal launched a few weeks ago by Msgr. Augustine Akubeze, President of the Episcopal Conference of Nigeria. The prelate asked the government authorities for urgent intervention to resolve in particular the numerous cases of kidnapping and massacres.

Then he launched an appeal to his fellow bishops and to all the priests and religious: "We urge you to continue to speak the truth to those in power, because this is the way available to priests to correct wrongs in society."

Cardinal Anthony Olubunmi Okogie, Archbishop Emeritus of Lagos, also pointed out that "as Christians we would contradict our vocation if we were not to oppose corruption, tribalism, egocentrism, kidnappings and the many other social ills we see daily in our country."

During the second Synod for Africa, Pope Benedict XVI had already spoken of the urgent need to promote reconciliation, peace, justice and development in Nigeria. A task that the local Catholic Church, and within it the Salesians, carries out every day.

The Spiritual Sons of Don Bosco, in particular, work for peace starting, above all, from the education of young people and the focus on people at risk - that portion of the population, that is, which otherwise would more likely be attracted by the lure of joining various militias.

Through their nine houses, located for the most part in the country's southern part, but with an outpost also in Kontagora-Koko, in the north-eastern region, in the very middle of Hausa-Muslim territory, they spread the values ​​of brotherhood and respect for all, welcoming children, girls and boys of any creed and ethnicity into their institutions.