Panama – Holiness also for you and your partner
Featured 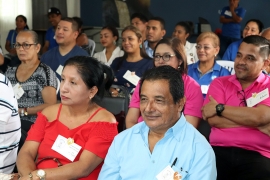 (ANS - Panama City) - It has oft been said that marriage is a common alliance that should last a lifetime. This is why thousands of people make their vows and decide to get married. But making a marriage work is much more difficult than simply getting married. Thus with time difficulties arise and the lack of formation and openness to God make love and couples break apart. Pope Francis emphasizes: "Marriage is the faithful union of love between a man and a woman, supported by the grace of Christ". Why it is necessary and fundamental to be well formed - an opportunity that "Hogares Don Bosco" in Panama has begun to offer.

In the 2019 Strenna the Rector Major recalls that some of the major wounds suffered by boys and girls are from families marked by separation. "There are families in which one of the parents disappears, or the presence of the father or mother becomes harmful to the children, for different reasons (physical, mental, moral or spiritual)".

On the subject, the Rector Major presents some virtuous models: “Laura Vicuña, born in Chile in 1891, was not acknowledged by her father, and her mother began to live with Manuel Mora in Argentina. Laura, wounded by her mother's moral irregularity, offered her life for her". Carlo Braga, born in Valtellina in 1889, "abandoned from a very young age by his father and mother, suffered great humiliations and often questioned his Salesian vocation, but his life was transformed into a testimony of paternity and goodness".

With this in mind, Sunday 21 July saw the first meeting of couples with the motto "Holiness also for you and your partner". The event was organized by the Salesian Family Ministry, "Hogares Don Bosco", and also included the testimony of the married couple Juan and Sol Pimentel. About 40 couples residing in and around the parish area participated in this formative event in which topics such as dialogue in the couple, crisis management in marriage and the importance of God in the family were discussed.

Pope Francis has clearly expressed that "The family is a way of holiness", but how can this journey be accomplished? He himself proposes 13 suggestions: to be patient, to live with an attitude of service, to cure envy, not to exhibit or to magnify things, to be kind, to live the detachment, to renounce every sign of inner violence, to ask for and grant forgiveness, to rejoice with others, knowing how to forgive everything, bet on trust, keep hope and endure everything, that is, "cultivate the power of love, which allows us to fight evil" with the help of God's grace.