Argentina – From city center to "villas-miserias". Salesians in Cordoba and Rosario
Featured 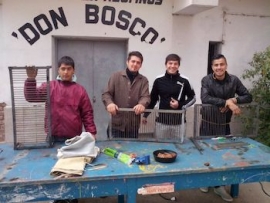 (ANS - Cordoba) - Argentina, the first destination of Salesian missionaries, is a large, beautiful and varied land. If the area of ​​Buenos Aires hosts numerous works and signs of the Sons of Don Bosco's presence, the seeds tossed in almost 150 years of their presence have also flourished in many ways elsewhere, too.

Cordoba and Rosario are large centers that host close to two million inhabitants each. They have a beautiful old colonial center and then a continuous development of barrios that dilate in concentric circles. At the center, the elegant districts, with a clear European imprint, the houses and streets well-kept and elegant. Then there are the popular or working-class districts, their buildings gray and block-like, where sometimes the sewers are without manhole covers and the asphalt is patched up, and though the people are poor, they still live a dignified life. Further on, the apocalyptic scenario of shacks and houses made with recycled material, where entire families live crowded in a single room, on the borders of decay and waste: these are the villas miserias.

In Cordoba and Rosario the Salesians have large schools and churches in the center of the two cities, because they were works built at the beginning of the twentieth century when, at the time, they were on the cities' outskirts. But the Salesians did not settle down; instead, they built new and large works in suburban barrios including kindergartens, primary and secondary schools, parishes, oratories and vocational training centers, such as the works of "Sant'Antonio da Padova" in Cordoba and "San Domenico Savio" in Rosario.

And it's still not enough. Because in both cities the Salesians set to work amid the poorest, starting here too experiences of youth animation, short vocational training courses, a soup kitchen ...

Working at “Sant’Antonio di Padova” in Cordoba is Juan Pablo, a young man of 28 years, head of the Vocational Training Center which is attended by 400 students, including young people and unemployed adults, and offers courses for free; he is also the Director of the oratory which during the week is open to children after school and on weekends animates recreational activities and  formative groups.

With the youths of the formative groups Juan Pablo goes to the nearby barrio-villa miseria among the gitanes and the poorest to offer street entertainment and involve the young in activities they like: sports, juggling, circus acrobatics ... Opportunities for a contact that leads to opening one's heart and becoming aware of personal poverty, family dramas …

Like Juan Pablo, many Salesians in Argentina imitate Don Bosco in seeking ways to take the first step and bring the last and the most unfortunate into these charitable works, involving the youths of the oratories, too.