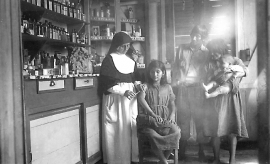 (ANS - Rome) - On 25 August 1969, in Sucúa (Ecuador), the airplane that was carrying Sister Maria Troncatti crashes shortly after take-off on the edge of that forest which for almost half a century was her "home of the heart", the location of her tireless donation among the Shuar people. Sister Maria thus lives her last flight: the one that takes her to Heaven! She was 86 years old at the time, years all spent on a gift of love. She wrote: "Of my religious missionary vocation, I am happier every day!"

Born in Còrteno Golgi on 16 February 1883, she learns through the Salesian Bulletin about the stories of missionaries and thinks about the religious vocation. She made her first profession in 1908 in Nizza Monferrato. During World War I she attended health care courses in Varazze and worked as a nurse. Following a violent flood, Maria promises the Madonna that if she saves her life she will leave for the missions. Grace obtained, Sister Mary asked the Mother General to go among lepers.

In 1922 Mother Caterina Daghero assigned her to the missions of Ecuador. When she came to Mendez, Sister Maria earned the esteem of the Shuar when she operated the chief's daughter, wounded by a bullet, with a penknife. The nuns settled permanently in Macas, a village of settlers surrounded by the collective housing of the Shuar.

Sister Mary remains in Ecuadorian territory for 44 years and will be called by all Madrecita. She is above all a catechist and evangelizer, rich in wonderful resources of faith, patience and fraternal love. Her work for the promotion of the Shuar women flourishes in hundreds of new Christian families, formed for the first time by free personal choice of young spouses.

From a simple and poor clinic, she manages to establish a hospital and prepares the nurses  herself. She is a "doctor" for the body and the spirit: while treating or distributing medicines, she advises and evangelizes. With maternal patience she listens, fosters communion among the people and educates the indigenous and settlers towards forgiveness, offering for this her own life. "A glance at the Crucifix gives me life and courage to work."

In this year in which the Church shall celebrate in October 2019 a Synod of Bishops for the Pan-Amazonian Region entitled: "Amazonia, new paths for the Church and for an integral ecology", the blessed witness Maria Troncatti shines for being the instrument of mercy of God towards all the needy in body and spirit; instrument of peace and reconciliation.