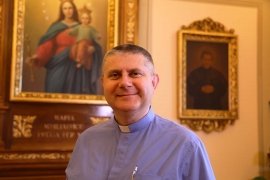 (ANS - Rome) - A few days after the closure of the Synod of Bishops on the Pan-Amazon region, Fr Rossano Sala, SDB, who participated in the Synod, presented an analysis of this important ecclesial appointment.

The cry of the poor and of the earth

Last Sunday at the Angelus, Pope Francis said that "the cry of the poor, together with that of the earth, reached us from the Amazon." In my soul, the force of several interventions of individual synod fathers who brought us the cry of the poor and of the earth have remained impressed; together, I am very grateful for the wealth of work done in the minor circle to which I belonged; Pope Francis' words were edifying in some moments, because he pushed us to deal with what is essential.

A combination of the last two Synods

It is natural for me to observe the two Synods that I lived: the Synod on young people and, this year, the Synod on the Amazon. The first was "ordinary"; the second "special". In the first I was Special Secretary, hence engaged from the beginning of the process and protagonist in writing the Final Document; in the second I was a "simple" Synod Father; in the first, there were young auditors, and their voice was strong, lively and purposeful; in the second, there were indigenous auditors, women and community animators who brought the concreteness of their faith experience.

I gradually realized with increasingly more strength that the problems of all are the problems of each and that every small part of the church is a fragment that refers to the whole.

The two lungs of this Synod

As in the body we have two lungs to breathe, even in the Synod on the Amazon we had two lungs. The first lung is called Evangelii gaudium, a document that marks the missionary turning point that Pope Francis is giving to the whole life of the Church. It is a matter of understanding that the mission is the life of the Church and that the Church herself exists to evangelize. The second lung is called Laudato sì, and we know that this document seeks to make everyone aware of the really critical situation of our mother earth in these first decades of the third millennium.

Indeed, the Final Document of the Synod starts from the concept of "integral conversion" and then develops it in the following four chapters: at the pastoral, cultural, ecological and synod level.

Generate processes rather than occupy spaces

We know that the Synod is a "walking together", not a "deciding together". Then the Pope, in full freedom, decides which to assume and indicates how to proceed, concluding the discernment and re-launching it from the operational point of view.

Knowing this is important to overcome the sterile polemics that fill newspaper headlines. Beyond the proposals and suggestions contained in the Final Document, it is important to recognize that this Synod has not really ended, but has inaugurated processes that will necessarily have to continue.

The promised land is always before us, and only by walking together can we reach it. This thought will also be good for the Salesian Family, called to assume synodality and discernment as a concrete style of living and working together for years to come.

The complete text of Fr Sala's reflection is available in the Italian version of the in-depth study.