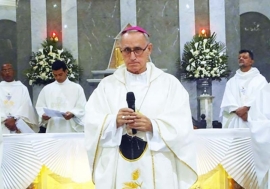 (ANS - Puerto Ayachuco) - In a country agonizing from an economic and social point of view, one of the few activities that continues to grow is mining. In particular, in the territory of the so-called "Arco Minero dell'Orinoco", along the river of the same name, there is a flourishing of mining activities: but they are in the hands of criminal groups. The result is a place of violence, of deforestation, of uncontrolled exploitation. Salesian Msgr. José Ángel Divasson Cilveti, bishop emeritus of Puerto Ayacucho and President of the Pan-Amazonian Ecclesial Network (REPAM), narrates the Church's inexhaustible efforts to protect the local population and the environment.

The area concerned is huge, 106,000 square kilometers, a mostly forest area, rich in biodiversity and large freshwater deposits. But uncontrolled mining activities are generating a real social and environmental apocalypse. Especially south of the river, for hundreds of kilometers, in the Amazon territory, there are immense gold deposits, but also of diamonds, coltan, bauxite and other metals: resources that end up in the hands of friends of the regime and North American and Asian multinationals who take advantage of the situation, while the locals are left with only crumbs and a territory and land ruined for decades.

The original populations that inhabit those areas, such as the indigenous Pemones, are threatened and forced to emigrate, often chased or thrown from their territories.

"The situation of the Arco Minero has been known for several years, especially since President Chávez started his mining policy, but it got worse in the last years of Maduro ... Mining in the whole area is completely illegal," says the Salesian prelate. Moreover, "with the production of oil down to less than one million barrels, compared to 3 million a day in the Chávez era, the government is trying to make the most of the other resources below ground, without looking at the environmental impact."

"The Church has always had a critical position, but it has never been listened to," continues Msgr. Divasson Cilveti. "Also, as REPAM, we presented a circumscribed denunciation and we carried out various awareness-raising activities. The depredation of the Amazon continues, and in the Arco Minero the greatest scourge is precisely that of illegal mining. They're all here: mafias, paramilitaries, Colombian guerrillas."

It is with this reality before his eyes that Msgr. Divasson took part in the Synod on the Pan-Amazon region, after having been part of the pre-Synodal Commission: "Hope is real, although it must be said that here in Venezuela, with this regime, there are no solutions in sight. The situation is serious, but we cannot forget that there are many forces, environmental organizations, NGOs, which are trying to take some small steps forward."

The Synod spoke clearly about these issues and presented its taking heed, being aware, denouncing, which has reached the whole world.

"This effort of the Church joins that of civil society. We must multiply our efforts and move forward with courage," concludes Msgr. Divasson Cilveti.