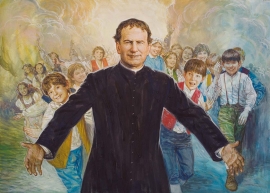 (ANS - Rome) - Who'd have thought? Don Bosco, a proto-ecologist? Don Bosco, pioneer of home waste collection 140 years ago? Seems so, according to at least one of the letters recovered in recent years and which will be included in the IX volume of the correspondence being prepared: a letter of 1885, which in the Turin of the time anticipates and, obviously in its own way, "solved" one of the great problems that today's society has to deal with, namely waste, over-consumption and throwaway goods.

It is a circular letter with a generic addressee, but certainly aimed at the city's wealthy families. In the missive, after having captured the attention of his interlocutors, Don Bosco immediately presents the possibility of reusing waste products, specifically: “the bones, leftovers from the dinner table and generally by the families that are thrown in the garbage” which instead were they “gathered in large quantities would manage to be ... useful to human industry.” Don Bosco knows, in fact, that “a company of Turin, with which I have nurtured a relationship, would buy it in any quantity.”

The proposal of the Saint of the Youth, agreed upon with the company concerned, which probably would have reused the bones to produce food products for animals, or fertilizers for the countryside, is that the "wealthy and benevolent families of this illustrious city ... instead of letting it spoil and return useless to their table, yield it freely for the benefit of the poor orphans gathered in my Institutes."

The project benefits everyone: the families freed themselves of some of the leftovers and waste, the company found resources, Don Bosco obtained money for missions ... and the city remained cleaner.

But the organization must also be taken care of. Here then is Don Bosco also planning the door-to-door collection: "To those families, who will have the goodness to adhere to this humble request of mine, a special sack will be given, in which to store the bones mentioned ... The bag will carry the initial letters O. S. (Salesian Oratory), and the person who will pass on to empty it will also present some sign, to make himself known by you or your family members."

Finally, Don Bosco also provides spiritual incentives for adhering to the initiative - "the gratitude of thousands of poor young men, and ... the reward from God" - and even provides for the drafting of the project, thinking of a coupon to be sent in response to his letter.

We do not know how many adhered to his offer, but the fact remains that in addition to being a great educator, a far-sighted founder, a man of God, Don Bosco was also a genius of Christian charity.

A more extensive version of the article will be available in the December issue of the Italian Salesian Bulletin.