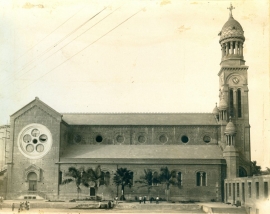 (ANS - Lima) - The Basilica of Mary Help of Christians, located in the Breña district, is one of the great jewels of the art of Lima. It marked a before and after in the Peruvian capital's religious architecture. Its facade features a large central tower - almost 60 meters high, the tallest structure in Lima until 1956 – which broke with the previous tradition of the era of the viceroys, with a retable facade and two large towers on the sides; its design decidedly influenced other temples in the city.

But the importance of this religious monument is rooted in its own conception, when it was designed to be the temple of gratitude to God for the Centenary of Independence, which was celebrated in 1921.

In 1916 the Salesians, present in Peru since 1891, called the Italian priest and architect Ernesto Vespignani, residing in Buenos Aires, to lead the project. He had already followed the work of the Salesian temple dedicated to St. Charles Borromeo and Mary Help of Christians. Once the official project was presented, it was approved as a National Tribute for Peru's Centenary of Independence

The Salesians began fundraising, directed by the priest Carlos Pane, and the same faithful, local and national, financed the construction. However, in 1920, the work's progress was such that it would not be possible to have the complete temple for the following year. In fact, on July 28, 1921, the central date of the centenary celebrations, the temple was unfinished; even so, on July 30, 1921, in the presence of the President of the Republic, Augusto Leguía, the temple was solemnly inaugurated.

Between 1921 and 1924, the work continued and on 8 December 1924, for the celebrations of the centenary of the battle of Ayacucho, the other sections were inaugurated, again in the presence of President Leguía.

Today, almost a century after its construction, the Basilica of Mary Help of Christians, a title it received in 1962 from Pope John XXIII, has been consolidated not only as a milestone in the city's architecture, but also as the main depository of religious art of the twentieth century in Lima. It preserves the polychrome image of Mary Help of Christians, work of the Salesian Workshops of Sarriá, Barcelona, Spain (1921), the largest electric pipe organ functioning in Peru, by Giovanni Tamburini di Crema (1934), and many other creations by national and foreign artists.

It is, without doubt, a complete catalog of the faith of the Peruvian people made art. A Salesian said well in a paper of 1917, when this temple had just begun to receive its first bricks: "It will be a more lasting monument than bronze, which will tell future generations that a generation of believers and patriots has passed through here."

And for this reason there are also those who would consider it the most appropriate venue to celebrate the Te Deum of the Bicentenary of Independence, in 2021.