Japan – Msgr. Yamanouchi, SDB, says: "The Pope of all, a prophet of God incarnate"
Featured 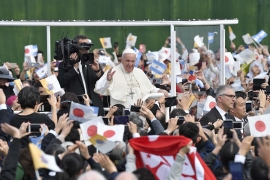 (ANS - Tokyo) - "From November 23 to 26 we received Pope Francis in Japan. We were surprised by his warm closeness, by his vigorous messages against the use and immoral possession of atomic weapons, on the protection of human life and the care of Creation, on the solidarity of refugees and immigrants." Thus, the bishop of Saitama, the Salesian Msgr. Mario Yamanouchi.

I believe that no man can endure such a dense program of activities with such a diverse audience, always with a smile on his face: it was the presence of a man full of God's love. As a bishop I was able to shake hands with the Pope four times. I remember the second, after Mass in Nagasaki, when greeting me he said: "And you, behave yourself. See you soon ... ", before giving me a pat on the back and getting in the car.

On the evening of the 23rd, as soon as he arrived at the Nunciature, he stepped from the car to greet about 200 people who were waiting under a heavy rain, thanking them for the welcome, without bothering to take cover himself. Then inside the Nunciature, when he finished reading the written greeting, he proposed an unscheduled program variation, saying that he was available if we wanted to ask him a few questions: "So we have a moment of fraternal dialogue."

After the third question, the President of the Episcopal Conference reminded him that the following morning the Pope had to take the plane at six and proposed to finish there. But the Pope spontaneously replied: "Ah, you are already tired, hungry, do you want to go home? I'm fine with you now, but if you want to go, no problem." After the translation there was a burst of laughter and then time for two more questions/gifts: the last one was by me, who gave him a "bolero" (a traditional game) with the papal shield, while I asked him a question.

On 25 November, after the meeting of the triple disaster in Fukushima, he arrived in the Cathedral of Tokyo to be welcomed by numerous children from various elementary schools. Then, upon entering, he was greeted by the youthful bustle of 900 voices. Three children then spoke, and I was very impressed by the second testimony, that of a teacher of Buddhist religion who neither his family nor the people in his school knew was a believer and a practitioner; and also from the third, of a Japanese-Filipino boy, a victim of bullying. The Pope encouraged everyone and gave everyone a rosary with his blessing. Everybody shouted continuously, but they didn't say: "Papa Francisco", but, with a Japanese accent: "Viva, Papa Franciscó".

Many other gestures and episodes remain that are etched in my heart, some visible even on my Facebook page.

I conclude with the words in Spanish, with which the young people of the University of Sofia greeted the Pope at the exit: "Esta es la juventud del Papa".