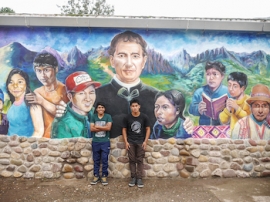 (ANS - Lima) - The first Salesians arrived in Peru in 1891, in what was the first Salesian Missionary Expedition with Don Rua as Rector Major. There are currently 16 Salesian works in Peru, distributed in all of the country's regions. There are large schools, many parishes, missionary chapels, oratories, youth centers ... and many projects created for the most vulnerable young people.

A good and worthy initiative that started a few years ago is that of the "Don Bosco House": boarding schools, currently ten, alongside schools or Salesian parishes, where the poorest children are welcomed. They are often boys with family problems, not orphans, but in or from large families, with parents who are sick, or unable to work, or children of single mothers, or even poor and simple children who come from the most remote and isolated villages, whose parents could never pay a place in a public college.

Ordinarily, about fifty children live in a Don Bosco House in what is a family atmosphere.

The last frontier of poverty that the Salesians in Peru have found themselves managing is the Venezuelan refugees, now about one million in the country. And since there was a wing of an unused Salesian college in Lima, the Salesians decided to use it as a center of first reception for Venezuela's children. It currently accommodates 52 young people aged 18 to 25.

The soul of this apostolate is Fr José Valdivia, the Provincial Economer of Peru, who after a whole day spent between papers and forms is recharged in the service of these boys. He joins them after dinner as the young people are immediately sent to work and all return late, after 10-12 hours of labor, and he stays with them after their meal when Don Bosco's educational system finds its natural space.

Between one chat and the next, he puts in a good word, senses the suffering of those who are silent, finds time to listen to the personal confidences of those who no longer have anyone with whom to speak openly, let off steam ...

Together with Fr José is also Fr Marino Del Prà, an 88-year-old missionary, residing in the home for the elderly, who after once being invited to talk to the boys, has never stopped going there: he meets them with all the wealth of his long experience as a priest and educator, he consoles them, encourages them, confesses all who ask him ...

Finally, there is Roxana, the center's cook, a lady with a good, broad smile, who prepares and distributes the dinner as the young come back tired from work. She too is an indispensable reference point for these young people who are far from their family, from their mothers.

Fr Valdivia, Fr Del Prà, Señora Roxana ... are the new Don Bosco, Don Borel and Mamma Margaret for the boys of Venezuela who arrive in Lima.