Italy - "We are Human", a model of inclusion in courtyard of Rome's Sacred Heart
Featured 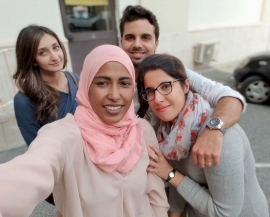 (ANS - Rome) - "SiamoUmani" is a project carried out by the "Siamo" Social Cooperative within the "Sacro Cuore" Youth Center in Rome, located next to Termini Station and the Basilica of the Sacred Heart founded by Don Bosco himself. It aims to encourage the job placement of young refugees and Italians and has recently been selected as an inclusion model at the "Global Refugee Forum" in Geneva.

There is Soheila, Iranian, and Amira, Somali, who put their artistic talents to good use in the creation of bonbonniere and gadgets for events and anniversaries; there is Viviane, originally from the Ivory Coast, who provides light assistance to the elderly in the center of Rome; there is Mirvat, a passionate photographer from Syria who curates a blog and aspires to become an influencer on social networks to transmit a message of integration to young people; and there is Morteza, a young man who arrived in Italy from Afghanistan, who makes himself available as a video-maker. There are all of them, together with other boys and girls, Italian and foreign, inside the Social Cooperative "Siamo", founded in 2014 by four animators and volunteers of the "Sacro Cuore" center in Rome.

When Cristina and Giuseppe, Francesco and Antonella - two young married couples, still very active in the Salesian work - made the decision to found "Siamo" (www.siamocoop.it), they intended to provide a solution, in a single stroke, to various problems: on the one hand, creating job opportunities for young refugees welcomed at the "Sacred Heart"; on the other, to meet the needs expressed by various elderly and needy residents in the neighborhood; above all, they wanted an environment to be created where the young people involved could enhance their specific talents and where there was a climate of collaboration and friendship between Italians and foreigners, so as to be a living testimony towards the outside.

Four years later, "Siamo" can be said to be succeeding in its intentions. From the first light assistance services offered to the elderly, the "Siamo" initiatives have grown and diversified: now the priority activities are those of the creation of solidarity gadgets and favors and the sale of organic and km 0 products, thanks to the involvement from different producers in the area.

There are several typical "Salesian" traits that animate the project. First of all, the educational mission: rather than giving the youths a job themselves, the cooperative accompanies them in discovering and cultivating the talents they have, promoting their entrepreneurship. Secondly, there is a "contagious" family atmosphere. Then there is also the accompaniment offered to the members of the cooperative by the Salesians and the Missionaries of the Risen Christ.

And finally, also the values ​​of humanity and integration towards young immigrants and at risk, which led the cooperative to launch the social campaign entitled #siamoumani, to raise awareness on the issue of refugees and what the cooperative does.

"Siamo": a small project born from the spirit of initiative of some lay people formed in Salesian circles and eager to transform the world with work and commitment to the social.