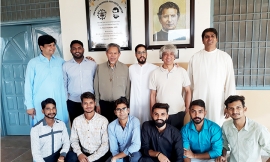 (ANS – Lahore) – During the past 20 years, the Salesian Mission in Pakistan has been accompanied by four Extraordinary Visitations: 2001, 2007, 2013 and 2019 and the 11 confreres of the Delegation with their Provincial, Fr Godofredo Atienza, have also received the follow-up letter of the Rector Major as a Christmas Gift. After 20 years of Don Bosco’s presence in this country it is possible to recognize the hand of God:

• For the blessing of a constant vocations growth in Pakistan, the enthusiastic first generation of Pakistani Salesians, formed in the Philippines.

• For the wonderful fruits of holiness, Bosconian Martyr, Akash Bashir (1994-2015) as the priceless ‘asset’ of the Pakistan delegation as well as the hundreds of other young people, both Christians and Muslims, who have received education in Don Bosco’s Way over the past 20 years.

• For the Salesian pioneers, Fr Hans Dopheide (+2011), Fr Pietro Zago (+2017) and other 17 Salesian missionaries who were sent to Pakistan. A special thanks for all Salesian Brothers who are making our Salesian apostolic consecration really complete and more visible.

• For many mission partners, both Christians and Muslims, who contribute to our mission.

• For the Don Bosco Alumni Association of Pakistan, launched last November in Lahore.

Of course, there are also challenges of a different nature, as is the case for every part of the Salesian world, and the few confreres in the Pakistan delegation are sailing the seas with the protection and guidance of Mary, Help of Christians: communication from the centre, accompaniment of the Delegation in this foundation stage, qualified vocation discernment and formation accompaniment, quality of Salesian educative-pastoral mission and fostering of a sustainable mission (economy).

The Rector Major also offered four main pointers for the charismatic growth of the Pakistan delegation: foster vocation culture and life-long formation, serve the young people in a mission shared with lay mission partners, foster a sustainable charismatic growth (pastoral reflection, group experience for the young and Urdu translations of Salesianity. At the same time, the Delegation needs a consistent accompaniment from the mother province (FIS) regarding leadership formation, a Salesian qualification plan.