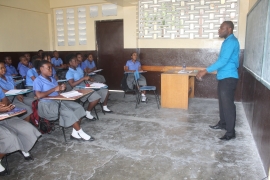 (ANS – Port-au-Prince) – Salesian missionaries were instrumental during the emergency response and the initial aftermath of the devastating earthquake that struck Haiti on Jan. 12, 2010. Missionaries had been in Haiti for nearly 75 years at that point, providing education and other social development programs for poor youth and their families long before the earthquake struck.

Salesian missionaries were among the first responders providing shelter and medical aid, means to securely transport, store and distribute relief supplies and clean drinking water, and possessing an important understanding of how to get things done in Haiti.

The work of Salesian missionaries never wavered and didn’t stop when the rubble was cleared away. Missionaries have remained as they always were an integral part of communities across the country. Rebuilding Haiti has not been easy. Over the last 10 years, Haiti has since faced a cholera outbreak, the destruction of Hurricane Matthew, a Category 4 hurricane that pummeled the country on Oct. 4, 2016, and most recently, political unrest that closed schools and disrupted normal life for months.

“Even in the face of devastating emergencies and challenges, Salesian missionaries have persisted in Haiti to bring hope to youth in need,” said Father Gus Baek, Director of Salesian Missions, the U.S. development arm of the Salesians of Don Bosco. “Salesian missionaries have continued to make progress rebuilding schools and programs with often limited budgets, challenges with supplies and delays in construction. The driving force to provide a better life for youth in need has remained the backbone of Salesian work and what motivates and compels the work even under the harshest of circumstances.”

LOOKING TO THE FUTURE

Despite the ongoing reconstruction and infrastructure improvements that are helping to rebuild Haiti, the country remains the poorest country in the Americas and one of the poorest in the world. According to the World Bank, over half of the country’s population of 10 million lives on less than $1 per day and approximately 80 percent live on less than $2 per day. The majority of Haitians lack adequate access to education, healthcare and nutritious food.

However, Salesian missionaries are continuing their work building schools and infrastructure, adding new training programs for students and teachers, funding and facilitating feeding programs, and most importantly, providing hope to youth for a better future.