RMG – Letter on the Salesian priest to appear in AGC
Featured 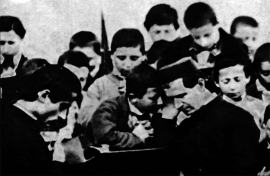 (ANS – Rome) – The forthcoming issue of the Acts of the General Council – no. 431 of 2019 – will carry a letter on the Salesian Priest. This is one more way of exploring our charismatic identity more deeply, as GC27 wanted, and is also a complement to the letter “Renewed Attention to the Salesian Brother” which appeared in AGC 424.

There has been little reflection in Church documents on the theme of the religious priesthood, as Fr Egidio Viganò had complained about after the synod on priestly formation and again after the synod on consecrated life. The recently released Ratio of the Church – The Gift of the Priestly Vocation (2016) – again contains no reflection on the theme. In the Congregation, instead, Fr Viganò’s letter in AGC 335, “The Priest of the Year 2000: A theme we have very much at heart,” remains a milestone.

“Living the Priesthood as Salesians” (AGC 431) begins by focusing on the great gift of Salesian consecrated life and the priesthood, goes on to speak about the Salesian who is a priest, and ends with suggestions for deepening the identity of the Salesian Priest.

It invites the Salesian Priest to have a clearer vision of his place in the Church. He must know that the highest dignity in the Church is that conferred by baptism. The Fathers of the Church used to say “Christianus alter Christus” – the Christian is another Christ. “Christianus has far greater significance than episcopus, even if the subject is the Bishop of Rome,” John Paul II said in Crossing the Threshold of Hope.

The letter also reflects on the uniqueness of the priesthood of Christ in order to urge priest confreres to avoid the tendency to of acting like bosses among the people of God. A priest behaving in a clericalist way would show that he has understood very little of the priesthood of Jesus.

The ministerial priesthood is meant, therefore, to be at the service of the common priesthood of the faithful. In the heavenly Jerusalem, we will need neither Bible nor sacraments, neither bishops nor priests, as Fr Viganò reminded us. And so, already in the Church “the order of institutional, hierarchical and operational realities takes second place to the Mystery they serve.”

The apostolic choices of the Salesian Priest are always mediated by the community and by the charism. Not every priestly activity is, therefore, suitable for a Salesian Priest, but only those that form part of our charism and mission and have been subjected to community discernment. The Salesian Priest is also reminded that his consecration colours everything. Like Jesus, he is an eschatological sign, a visible reminder to people of the life of the resurrection that God is offering all of us.

The letter concludes by listing implications for vocational animation and for the various phases of formation. The challenge of specific formation is to ensure that confreres keep growing in the fullness of their Salesian consecrated priestly identity. Only when we live this vocational identity fully and harmoniously, notwithstanding our personal limitations, are we what the Church, the young and God’s people ask us to be. When this is not the case, the famous saying of Augustine applies to us too: Bene curris, sed extra viam: You are running fast, but in the wrong direction.