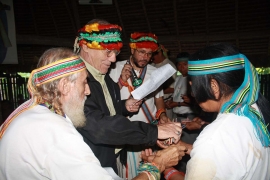 (ANS - Lima) - Living and accompanying the most needy of Amazonian populations is no longer considered by the Catholic Church as something for a few "dispersed in the jungle", as could have been the case with, or at the time of, Fr Luis (Luigi) Bolla. In one of his speeches to missionaries, Pope Francis said: "Do not be afraid to open new roads", and today these new roads are "Amazonian peoples", forgotten by a society centralized in large cities and by a Church which is not yet missionary.

The Pope not only supports those who opt for this life option and "Amazonise" their minds and hearts, whether religious or lay persons, but encourages them to continue taking risks and to continue to be creative in "opening new paths and bringing the Word of God".

From 28 to 30 January, with the participation of over 100 people from the eight apostolic vicariates of Peru, an "Amazonian Indigenous Pastoral Meeting" was held on "Following up on the Synodal Path". The Salesians, represented by Fr Diego Clavijo and two permanent deacons, certainly could not but be at the event, held in the "San Francisco Solano House" in Rímac (Lima).

The event was guided by most of the Amazonian bishops. Among them were Msgr. Alfredo Vizcarra, bishop of the Vicariate of Jaén, and mon. Martín Quijano, a Salesian missionary who took over the Vicariate of Pucallpa last September.

During the meeting, the voices of many indigenous people were heard, but above all the cultural richness of languages ​​was appreciated in a country of 32 million inhabitants: currently there are 47 indigenous languages ​​in Peru, four of which are spoken in the Andean region and 43 in the Amazon.

Deacons Puanch Mukuin and Roman Saaan and, finally, Fr Clavijo referred to the experience of the "permanent diaconate" in the Achuar people.

The experience of inculturation and the decades-long presence of the Salesian missionary Fr Bolla, of Italian origin, was, without a doubt, what most struck those who had never heard of that name. His successor among the Achuar, Fr Clavijo, explained the process of inculturation of the five permanent Achuar deacons, who guide their respective communities according to the teachings of the Catholic Church.

Deacons Puanch and Roman, who do not speak Spanish fluently, narrated their lives in the Achuar language. "Father Bolla invited us to spread the Word of Jesus in our language, because in this way it is easier to reach the hearts of our families. We accompanied him through the communities and learned a lot from him."