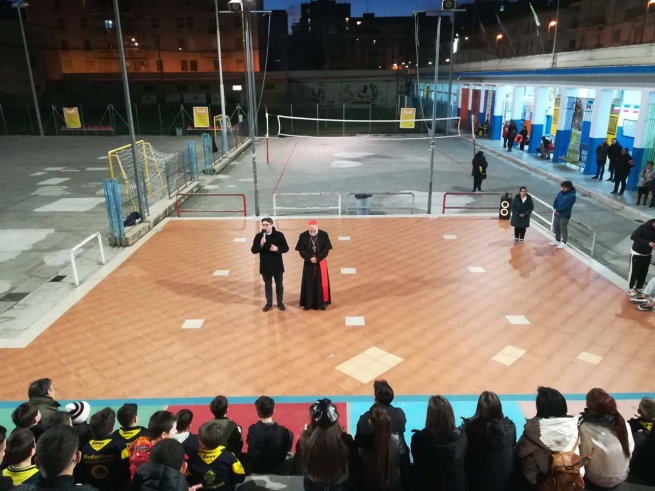 (ANS - Bari) – This past week, Bari was the center of the Mediterranean: in fact, from 19 to 23 February, it gathered 58 bishops of the 20 Mediterranean churches for the meeting "Mediterranean, frontier of peace." In Bari, the Salesian work "Santissimo Redentore" has been active for over a century, a true educational oasis for youth in the working class district of "Libertà", which hosted one of the participants in the Bishops' meeting, namely Salesian Cardinal Cristóbal López Romero, archbishop of Rabat (Morocco).

The Salesian work in Bari dates back to 1905 and was founded by Fr Michele Rua, First Successor of Don Bosco. Today, the center has enlarged to over 20,000 square meters "of friendship and future": it is an open space made up of sports fields, a vocational training school, the oratory, day centers. Directing it is Fr Francesco Preite, accompanied by a large community of collaborators, religious and lay people, to carry out the many projects: a boarding house for 30 university students away from home; a residential educational community for unaccompanied minors and minors reported by the criminal court; a vocational training school for 60 middle-school children, with experiences of early school leaving; a daytime socio-educational center for 30 minors, which welcomes children at risk of marginalization and deviance; and a cultural laboratory with "the neighborhood library."

The center's beating heart is the parish and the oratory which is attended by 300 young people from the neighborhood, aged 8 to 25, who can also find school support projects, catechism programs and recreational and sports itineraries.

The neighborhood where "Libertà" arises is a crossroad of streets that are vivacious, multi-ethnic, young ... But also marked by difficulties of integration, early school leaving, lack of job prospects, as well as organized crime. The Salesians accepted the challenge and started a formation project. Fr Preite prefers to call it "an anti-mafia construction site, a path to the sense of justice against all forms of crime ... There is always hope in young people; otherwise, everything we do here would not make sense, that is to give young people their present, give them the chance to live it fully, to give a future perspective."

Card. López Romero also spoke on the value of Salesian education and spirituality and active citizenship in the thought of "Goodnight" offered on Saturday 22 February in the oratory of the Redentore.

In his message, the cardinal said: "Like Don Bosco, I too, here among you young people, feel very well. I was like you, a boy from the oratory in Spain. And I learned many things at the oratory: playing football, table tennis ... But, above all, I learned to know and love Jesus and Mary. And this is the same that I wish you all. That you can spend nice days here at the oratory, doing sports, learning many things ... But, above all, that you can learn to be upright citizens and friends of Jesus and Mary."