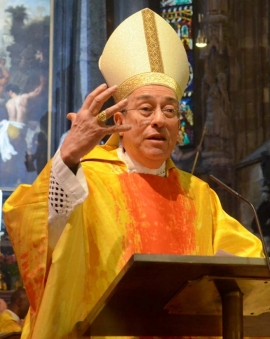 (ANS - Tegucigalpa) - During the Mass celebrated on Sunday 8 March in the cathedral of Tegucigalpa, Cardinal Óscar Andrés Rodríguez Maradiaga addressed the faithful, alluded to the current crisis generated by the coronavirus, saying that it brought a world "full of pride" to its knees.

"The arrogance of those who believe in the power of weapons, armies, material progress, industry," he said, "is paralyzed in an instant by a virus, invisible things, unpredictable things."

On the one hand, Cardinal Rodriguez wanted to underline the lesson that "even if one had all the power, all the money, all the weapons, the life of man, as the psalm says,  is always fragile as the flowers of the field."  On the other hand, he drew attention to a bigger problem: "Dear brothers, dengue is much worse and has caused many more deaths and we are indifferent and it continues to proliferate," said the Cardinal, according to reports by news agencies.

Similarly, the Cardinal urged those present not to [over]dramatize the advance of the epidemic, which has already reached Central America, and to worry instead about what can be considered a permanent threat in countries like Honduras: violence that reigns.

If governments and citizens do not opt ​​for peaceful solutions, he said, the country's landscape "will continue to be a slaughterhouse", with figures that exceed ten violent deaths per day.

However, the cardinal did not fail to ask the faithful to take responsibility for the coronavirus emergency, recommending "not to expect everything to come from others", but to implement concrete preventive measures. "We know that God gave us intelligence" to protect us from evil, he said.

“Dear brothers and sisters, we must not despair or be anxious, or sad, because of the spread of the news of this virus; many people are afraid. No. Our hope is firmly placed in God, but we must collaborate and, therefore, take care of our health, take care of our cleanliness, take care of healthy eating too," he emphasized. For this reason, the Cardinal added that he believed it was necessary to receive Communion in hand.

The Cardinal's message is a message of serenity and total trust in God that never disappoints. And he concludes in fact: "Let us put our hope in God."