RMG – Pope Francis to the Salesians: "Do dream ... and make others dream as well!"
Featured 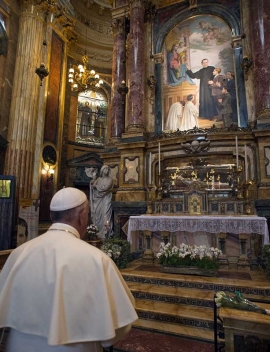 (ANS - Rome) - Pope Francis' closeness to the Salesian Family is well-known: the numerous ties with several Salesians meaningful to his life, the school year at the Institute of Ramos Mejía, his devotion to Mary Help of Christians ... But in the message he sent on the occasion of the 28th General Chapter of the Salesian Congregation, Pope Francis amazes for the intimate and profound knowledge of Don Bosco's charism. Thus, speaking with familiarity, as if it were a simple "goodnight" in the oratory, he helps to identify the answer to the Chapter's question: "What Salesians for today's young people?" For the Argentine pontiff, the answer is: "the Salesian of the XXI century is a man full of hope because he knows that his centre is in the Lord, able to make all things new."

After rejoicing at the fact that the General Chapter was celebrated in Valdocco - from which he also derives the invitation to never forget the "youthful noise and the chattering of the Oratories", especially those who find themselves "like sheep without a shepherd", the Holy Father invites each Son of Don Bosco to "cultivate a contemplative attitude, able to identify and discern the crucial points," which then makes it able to show and open onto other dreams that this world fails to offer.

Taking Don Bosco as a model, the Pope indicates to the Salesians a religious model incapable of remaining neutral or inert in the face of events: a Salesian, we could say with reference to the Strenna for 2020, who lives the policy of the Our Father, descended into reality to bring reality towards God. A Salesian neither clerical nor rigorist, but rather a consecrated person who does not choose to separate himself from the world to seek holiness, but lets himself be questioned, consulted, and chooses how and which world to live in.

The world of the Salesians is that of the young and how to live in it is simply together: "Those encountered by Don Bosco yesterday and the Salesians today are not mere recipients or end receivers of a strategy planned in advance, but living protagonists of the oratory yet to be fulfilled," adds the Pontiff.

He also spoke of the special figure of the Brother Coadjutor. He said, "Your consecration is first and foremost the sign of a gratuitous love of the Lord and for the Lord in his young people, that is not primarily defined by a ministry, a function or a particular service, but through a presence.... The first call is to be a joyful and free presence among young people."

Among the ideas he offers for the future journey of the Congregation, Pope Francis also underlines the gift of the female presence in Salesian works, from Mamma Margherita onwards: a presence capable of transmitting the dimension of hospitality, an affective - as well as effective - presence, and for this to be valued "as an actor who is not auxiliary, but rather constitutive of your presences."

Finally, observing the universal presence of the Salesian Family, the missionary reach, the attention always paid to the inculturation of the Gospel, Pope Francis encourages Salesians "to preserve the wealth of many of the cultures in which you are immersed without trying to 'standardize' them." On the contrary, "in this way the Salesian spirit, far from getting lost in a uniformity of tones and nuances, will acquire a more beautiful and attractive expression  ... It will be able to express itself in 'dialect'." And it will also be able to speak, with the same naturalness and authority, even in the languages ​​of digital courtyards, in "... the widespread (and necessary) 'pastoral of the screen.'"

The Pope's conclusion is almost a hymn to Don Bosco and his dreams for young people, and in particular those most in need: “Dream open houses, fruitful and evangelizing; homes that allow the Lord to manifest to many young people his unconditional love and allow you in return to enjoy the beauty to which you have been called. Do dream... And not just for yourselves and for the good of the Congregation, but for all young people without strength, deprived of the light and comfort of friendship with Jesus Christ, without a community of faith that sustains them, devoid of a horizon of meaning and life. Do dream ... and make others dream as well!"

The full text of the letter is available on sdb.org.