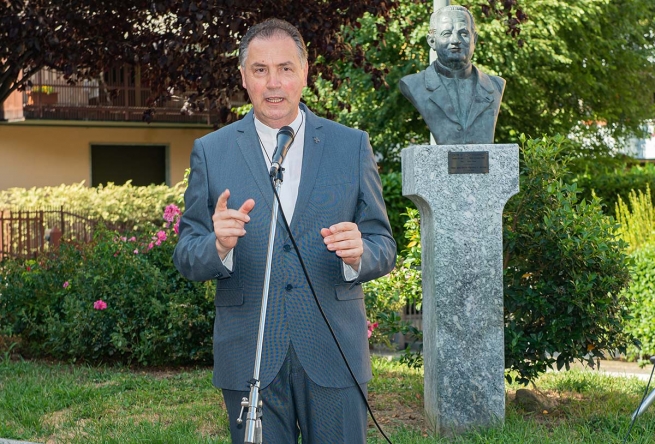 (ANS - Sondrio) - For the 100 years since the birth of Fr Egidio Viganò, the VII Successor of Don Bosco, Fr Ángel Fernández Artime, current Rector Major, went to Sondrio, the birthplace of Fr Viganò, to pay homage.

The visit officially began on Saturday 25 with a greeting to the Salesian community of Sondrio. Subsequently the Rector Major and his companions - Fr Stefano Martoglio, Vicar of the Rector Major, Fr Stefano Vanoli, Secretary of the General Council, and Br Hilario Seo, representing the Social Communication Department - visited the Salesian church, where for the occasion a photo was shown depicting a very young Egidio Viganò with Fr Filippo Rinaldi, II Successor of Don Bosco.

The day ended with a family visit to the local community of the Daughters of Mary Help of Christians.

The central acts of the visit, however, took place yesterday, Sunday 26 July, the exact day of the centenary.

After a private visit to the cemetery of Sondrio, with stops and prayers on the tomb of the Salesians of the local community and on that of the Viganò family, a public commemoration of the VII Successor of Don Bosco took place in the afternoon in Piazza Egidio Viganò. The vice mayor of Sondrio, Lorenzo Grillo della Berta, the Prefect, Salvatore Rosario Pasquariello, other representatives of local institutions, members of the Salesian Family, and sympathizers of Don Bosco's work took part in this civil memorial act.

Here, in addition to placing a wreath of flowers at the foot of the bust portraying Fr Viganò, Fr Á.F. Artime underscored the bond that Fr Viganò had always maintained with his land, with his beloved mountains, "with those roots that should not be lost."

Afterward, in the courtyard of the Salesian work, in compliance with current anti-Covid-19 measures, the Rector Major presided over the Sunday Eucharist. In his homily, drawing inspiration from the Gospel and from the example of the net full of all kinds of fish, the X Successor of Don Bosco observed how Fr Viganò, in his long service at the head of the Congregation (from 1977 to 1995) knew how to sift well in the difficult post-council years, the things that were to be kept and those that were to be left aside; he recalled the great intuition of the Africa Project; and underlined the commitment of Fr Viganò to make the Salesians authentic men in their relationship with God and others.

Today, Monday 27 July, the Rector Major is busy visiting the large complex of the Salesian work in Sesto San Giovanni, always in the ILE Province.

More photos on ANSFLICKR and DropBox.