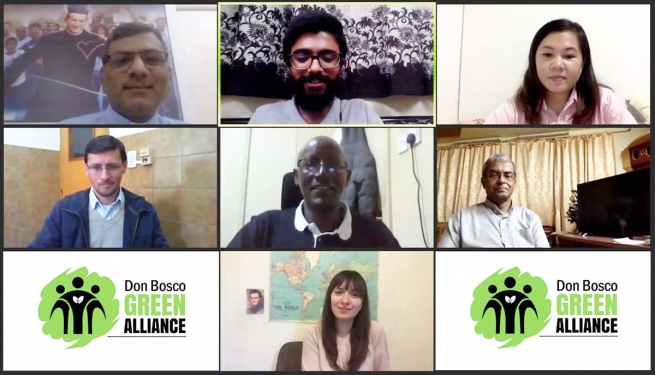 (ANS – Mumbai) – The Global Lead Team of the “Don Bosco Green Alliance” had its first meeting on 25 July. The meeting was held online and was attended by the various Regional Coordinators, who, along with the Convener and Executive Secretary of the alliance, form the Global Lead Team.

Fr Savio Silveira, Convener of the alliance, presented a brief status report at the start of the meeting.  He reported that the alliance presently has 303 Salesian Family institutions from 62 countries as its members.  He also explained the priority areas which the alliance is focusing on and the campaigns that it is promoting.  For the ongoing Laudato Si Year, the alliance has launched the ‘Rethink, Reconnect, Renew’ campaign.  Several activities have been proposed as part of this campaign and webinars are also being held every month to stimulate a deeper reflection on this theme.  Recently, a webinar on ‘Youth Eco-Spirituality’ was held, which also featured speakers from other networks like Eco Jesuits and Catholic Youth Network for Environmental Sustainability in Africa (CYNESA).

An important topic on the agenda for this meeting was the approaching ‘Season of Creation’, which will be celebrated from 1 September to 4 October.  Pope Francis has encouraged Christians all over the world to participate in this annual celebration of prayer and action for our common home. All the members of the Don Bosco Green Alliance will participate through various activities and events that are being planned.  The theme for the 2020 Season of Creation is ‘Jubilee for the Earth: New Rhythms, New Hope’.

The Global Lead Team of the Don Bosco Green Alliance is responsible for the strategic leadership and coordination of this entire Salesian environmental network.  Besides Fr Savio Silveira, the Convener of the alliance, the other members are Fr Silvio Torres from America South Cone, Ms Mariana Cejudo from Interamerica, Br John Njuguna from Africa-Madagascar, Fr Jerry Thomas from South Asia, and Ms Taichi Miranda from East Asia Oceania.  The Global Lead Team also includes Macson Almeida, the Executive Secretary of the alliance.