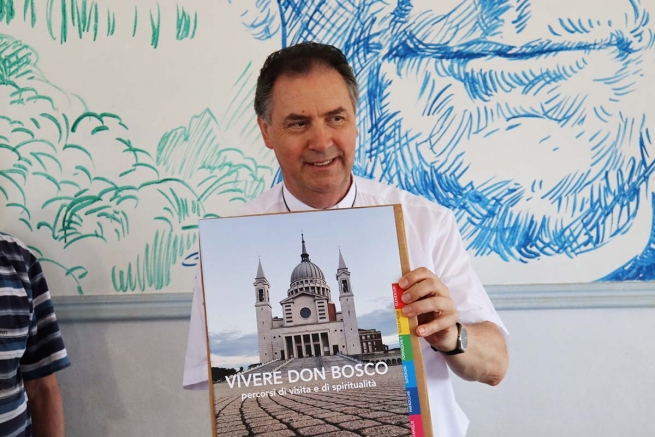 (ANS - Turin) –  The first two booklets of the series “Vivere Don Bosco – percorsi di visita e spiritualità” were presented on the solemn day on which the whole Salesian world celebrated the 205th anniversary of Don Bosco's birth. The event took place on the hill of the same name in the presence of the Rector Major, Fr Ángel Fernández Artime, his Vicar Fr Stefano Martoglio, of the Councilor for the Mediterranean Region, Fr Juan Carlos Pérez Godoy, of Fr Enrico Stasi and Fr Leonardo Mancini - who took turns these days at the helm of the Special Circumscription of Italy Piedmont and Valle d'Aosta.

These booklets collect the activity of a group of people (priests, consecrated men and women, lay people) who work at Colle Don Bosco to welcome the many pilgrims who visit Giovannino Bosco's childhood places. The quarantine period was an opportunity to reflect and answer the question: "What sort of visit to propose and offer to groups of pilgrims who will return to the Hill to see, learn, pray and get spiritually enriched?"

Hence the idea of ​​creating a series of paths dedicated to those who want to have a deeper knowledge of the places where the Lord and the Virgin Mary, through the 9-year-old Giovannino Bosco's dream, showed him "his field of work ”, nourishing in him the desire to help young people, especially the poor and abandoned.

For the various paths, it was decided to adopt this subdivision: Elementary, Middle, Vocational Training, High Schools, Parishes and Families (to date the paths dedicated to groups of middle schools and families have been finalized, the others are in the processing stages).

Everyone is given the opportunity to take advantage of the indicated routes by choosing the one that best suits their group, based on the planned experience and the time available. The itineraries indicate various ways of visiting, enriched by moments of prayer, personal or community reflection, the possibility of receiving the Sacrament of Confession and the Eucharist, but also games and entertainment ...

In this way, not only the physical and historical knowledge of the places is transmitted, but also their spiritual dimension.

This work was made possible thanks to the idea and coordination of Fr Kalyan Kumar Yandava, responsible for the reception for residential groups at Colle Don Bosco and member of the "Salesian Places" team, who together with Fr Gianni Rolandi, Director of the work of the Colle, was able and wanted to involve all the members of the Salesian community "Mary Help of Christians" of the Colle, the Contemplative Fraternity "Mary of Nazareth" and the staff of the Ethnological Missionary Museum.

Each one, with their own efforts and commitment, has contributed to the fulfillment of this idea which, among the many objectives set, has one that emerges on the others: to make Don Bosco and his educational model known more and more, as Don Bosco leads to God and for his young people he always had only one desire: to see them "happy in time and in eternity".