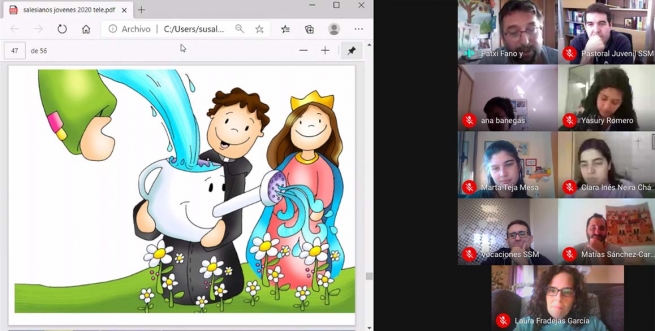 (ANS - Madrid) - While waiting for the various Salesian leisure time proposals to be launched in complete safety, about 700 animators belonging to 47 Salesian houses of the Youth Centers of the "Spain-St James the Greater" Province (SSM) and of the “Valdocco Federation” of the Daughters of Mary Help of Christians of Madrid and Castile La Mancha, have started the formation course foreseen by the proposal of the Education in the Faith Itinerary (IEF). Thus, on Saturday 26 September, they listened attentively to 11 artists from different disciplines who proposed various forms of evangelization through art.

Music, video, photography, painting, social networks, body expression, illustrations ... They crossed the walls of the Salesian houses and the screens of the young people in their homes. The Delegation of Youth Ministry, in fact, modified the traditional format of the meeting, which used to bring together these young people in person in different times and places, and proposed instead a hybrid solution in which the animators, some in their youth centers and some in their homes, took part in presentations, celebrations and various workshops on the theme of beauty and faith.

Fr Xabier Camino, SSM Provincial Delegate for Youth Ministry, began by explaining: "With this appointment, we want to help us recognize beauty as part of the language of faith, because God also manifests himself in beauty, in art, in painting ... God is creative, loves creativity and tries to surprise us in the languages that touch the most intimate part of the person."

The illustrator "Fano" opened the day with a presentation followed online by over 200 people, and he proposed animators be "like a watering can": "To be beautiful," he observed, "we must leave a space to allow God to act in us, so that we can then act on the world with our watering can. An interior life and a life of service."

Later, the young educators participated in several workshops held by 9 experts from different artistic fields, who helped the young particpants to understand these languages and to help apply them in their work with children and young people of religious groups.

The musician Toño Casado, the illustrators Javi Comino or Jota Llorente, the dance expert Victoria Hernández, the university professors Carlos Voces and Juanjo García Arnau, the audiovisual communicator Yasury Romero, the cartoonist Miguel Olivares and Abel Domínguez, expert on the Word of God and Art - all members of the Salesian Family or very close to it – took turns animating the various workshops.

Finally, the young people participated in a prayer prepared by the animators of Vigo, Santander and Guadalajara, which included moments of musical animation curated by the songwriter “Migueli”.

The meeting was closed by the Provincial of SSM, Fr Fernando García, who encouraged young people to be "men and women of hope", as Pope Francis said to Salesians in the message for the 28th General Chapter of the Congregation.