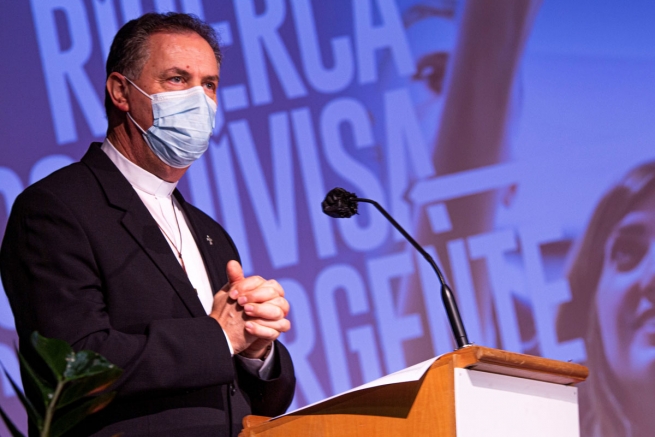 (ANS - Rome) - Yesterday, Thursday 15 October, the inauguration of the new academic year of the Salesian Pontifical University (UPS) was held; its theme: “Shared and convergent research”. The event, which also marked the end of the celebrations for the 80th anniversary of its foundation, saw the participation of numerous authorities and illustrious guests.

The morning began with the Eucharistic celebration presided by the Grand Chancellor of the UPS and Rector Major of the Salesians, Fr Ángel Fernández Artime, and concelebrated by Fr Ivo Coelho, General Councilor for Formation. In his homily, the Rector Major, faced with the challenges of the pandemic, addressed the invitation to keep “a deep and not superficial gaze” because “the stakes are very high.” Slogans or shock statements are not enough to overcome this moment of emergency. “If there is a risk that we must avoid as a university educational community, it is that of letting ourselves be touched by another very dangerous and current virus: individualism.”

Therefore, he concluded: “To win, we must not isolate ourselves in our backyard, but, as proposed this year, join forces, share and make a path of convergence not only through new technologies and social networks, but through the construction of authentic human relationships inspired by the Gospel.”

Subsequently, the academic inauguration act took place in the Paul VI Hall. From the stage, the Mayor of Rome, Virginia Raggi, underlined the importance, in Roman territory, of the Salesian Pontifical University she defined as “a place of human and professional formation where young people have the privilege of living a climate of strong interculturality and internationality.”

The Minister for Equal Opportunities and the Family, Elena Bonetti, later spoke of integral humanism and the “vocation to formative choice”, a vocation that characterizes the eighty-year history of the Salesian institution.

The Rector of the University, Prof. Fr Mauro Mantovani, presented the report on the year just ended, with the shadows of the pandemic, but also some lights: the development of synergies with other universities, the experimentation of online teaching as an “integrative form”, the promulgation of the Statutes and of the Order of Studies renewed… A moving memory was finally dedicated to Fr Grzegorz Jaskot, victim of Covid-19, and Fr Carlo Nanni, UPS Rector Emeritus, who passed away last July.

The Prolusion of the Academic Act was entrusted to Prof. Marica Branchesi, astrophysicist and professor at the Gran Sasso Science Institute of L'Aquila. “Today's discoveries are collective”, the result of the collaboration of “scientists from all over the world who have been able to break down barriers and understand that diversity is a value. It is by building bridges and not walls that these great advances in knowledge are achieved,” she said.

Finally, after a musical interlude and the awarding of several teachers and students, Fr Á.F. Artime officially opened the Academic Year 2020/2021.