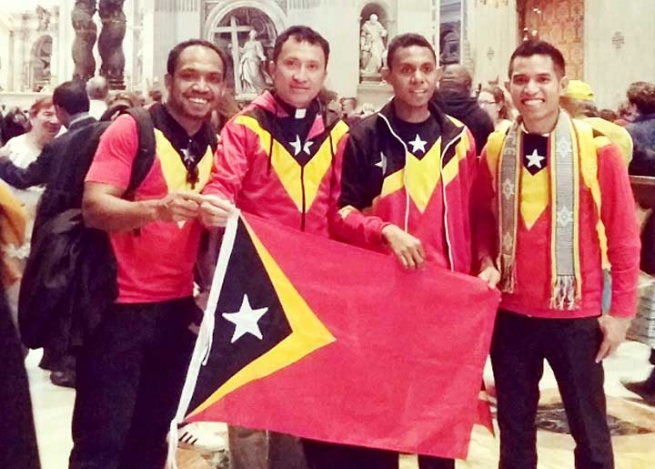 (ANS - Fatumaca) - On 12 November the Salesians of Fatumaca honored the feast day in memory of the national heroes. In fact, November 12 is a historic date for the people of East Timor. On this day we remember the "Santa Cruz Massacre", a violent repression of East Timor's independence demonstrations which took place in the cemetery of Santa Cruz, in Dili, on November 12, 1991, during the Indonesian occupation of East Timor.

After the events in Dili, the young Timorese continued to fight bravely for the freedom of their land. Numerous international movements took up their cause, demanding respect for human rights. The Catholic Church also played a very important role, contributing to the liberation of the country. Bishop Carlos Filipe Ximenes Belo, SDB, was among the most important figures in this process, earning the nickname "The Voice of the Voiceless" and being awarded the Nobel Peace Prize in 1996 for his commendable commitment. Eight years later, in 1999, Timor Leste obtained its freedom through a popular referendum and its independence was restored in 2002.

Today, in memory of these events, the government encourages every school to organize a Mass, with the special intention of praying for the young martyrs of that fateful day of 12 November 1991.

For this reason, the students and the entire educational community and the Don Bosco Technical Boarding school in Fatumaca organized a special Rosary. Salesians, novices, aspirants and all the staff gathered in the school's basketball court to pray for the martyrs and heroes who bravely sacrificed their lives for the freedom of Timor Leste.

The Rosary was also offered to today's young Timorese, so that they can live the spirit of these national heroes in their daily activities, such as study and prayer. The Salesians then prayed for the future of East Timor, so that it may become a country with greater development. Furthermore, immediately after the Rosary, a Mass was celebrated in the National Shrine of Mary Help of Christians, presided by Fr Savio David, Rector of the Salesian community in Fatumaca.