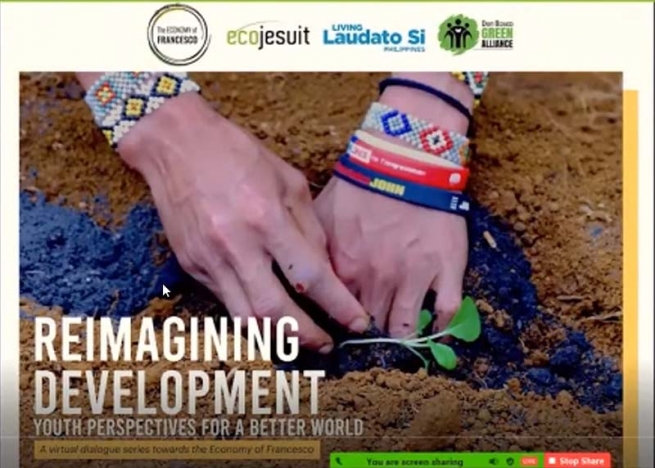 (ANS – Assisi) – The Economy of Francesco (EoF), a global online event that engaged young people, entrepreneurs and economists was held from 19 to 21 November, from Assisi in Italy. It was called for by Pope Francis in 2019 through a public letter of invitation, in which he hoped to promote: “a process of global change. One in which not only believers but all men and women of good will, beyond differences of creed and nationality, can participate, inspired by an ideal of fraternity attentive above all to the poor and excluded.” Don Bosco Green Alliance participated in the “EoF Marathon”, which was held as part of the overall Economy of Francesco event.

The Marathon began on 20 November evening and culminated on 21 November afternoon, involving young participants from 20 countries, who presented their territories, cultures, experiences, local projects and calls for action.

For its session during the EoF Marathon, Don Bosco Green Alliance collaborated with “Ecojesuit” and “Living Laudato Si’ - Philippines”. The theme chosen for the session was “Reimagining Development: Youth Perspectives for a Better World”. In preparation for this session, a three-part virtual dialogue series was held across the months of August and September. A total of 36 young people from 15 countries took part in these virtual discussions.

The Marathon session was hosted by Brex Arevalo and Macson Almeida, representing Ecojesuit and Don Bosco Green Alliance respectively. They highlighted the vision of young people on the issue of redefining development and their idea of a better world.  Some of the major themes that had emerged during the preparatory dialogue series were: inclusion, equality, education, lifestyle, consumption and happiness.  A few of the participants spoke about their experiences during the dialogues and what they learnt from their participation.

These recommendations are the outcome of the collective reimagining of development that spanned over two very fruitful and joyous months, and are informed by Laudato Si’, the “Laudato Si’ Goals”, Querida Amazonia, and the Sustainable Development Goals. These are not only aspirations, but commitments of the heart, made in solidarity for a better and more beautiful world.

The video of this session can be viewed here.

The document of recommendations is available here.