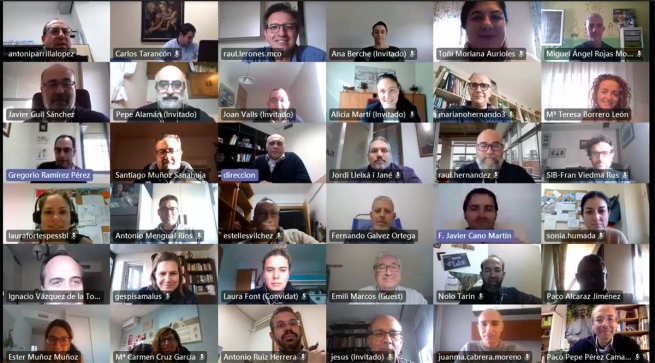 (ANS - Seville) - The IV Meeting of the Salesian Social Platforms of the "Spain-Mary Help of Christians" (SMX) Province took place at the end of last month in digital mode on the theme: "United for others". The meeting brought together about 50 participants, including Rectors, Heads of social platforms and of individual areas of action. In the first part of the meeting there was a reflection on the Rector Major's Strenna, as a message of stimulus in the face of the challenges that await the Social Platforms. Specifically, in his opening speech to the meeting, Fr ​​Joan Valls, Coordinator of Social Platforms, referred to the challenges that social platforms must take on deriving from two situations. On the one hand, the pandemic: discerning what it implies and what it calls for; on the other hand, the definitive start-up of the new Salesian foundation of the SMX Province.

As part of this meeting, the new "Don Bosco Salesianos Social" Foundation was presented, which brings together the three entities that have so far managed the social platforms of the SMX Province: the "Ángel Tomás-FISAT" Foundation, the “Fundación Don Bosco” and “Salesians Sant Jordi”.

"United for others" is thus the meaning of this unification. United, the three organizations form an entity that develops projects and programs in favor of the integral inclusion of children, young people and their families in a situation or at risk of social exclusion, as well as other groups of people in situations of vulnerability: migrants, women, people with addictions ...

Currently the three organizations are accompanying as many as 20,725 people through more than 180 projects: integral educational paths, which take the form of residential assistance projects, socio-educational projects, job placement, support for formal education, the fight against the digital divide, community promotion, as well as initiatives to raise awareness and promote social volunteering.

Their scope of action includes the Communities of Valencia, Catalonia, the Region of Murcia, Extremadura, Andalusia, Aragon, the Balearic Islands, the Canary Islands.

Through this unification, "Don Bosco Salesianos Social" will be able to strengthen its commitment to the transformation of society by increasing projects and programs, the range of action and the number of people involved and assisted.

The joint work and the combined experience of over 50 years spent in giving trust to people, especially the most vulnerable young people, make "Don Bosco Salesianos Social" an organization that, at its birth, can already boast the ability to respond to serious situations of inequality, lack of protection and opportunities that, alas, exist in society.

The unification process began six years ago. Now the journey of “Don Bosco Salesianos Social”, which will be based in Seville, has truly begun.