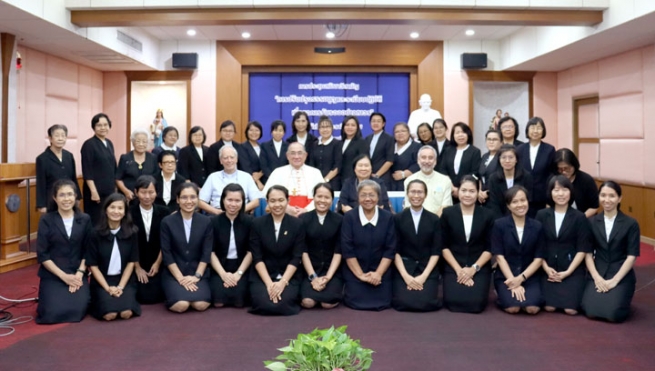 (ANS – Bangkok) – From 25-28 February 2021, 35 members of the Secular Institute of the Daughters of the Queenship of Mary Immaculate gathered for the 4th Extraordinary Chapter at the Mother House of the Institute in Sathorn Road, Bangkok. The opening was graced by the presence of Cardinal Francis Xavier Kriengsak Kovitwanich, the Archbishop of the Catholic Diocese of Bangkok. He presided at the opening liturgical service and gave a homily.

This special chapter was called to improve the 2011 Constitutions and Regulations of the Institute. That book was approved by the local ordinary of the Diocese of Bangkok as a temporary guideline for practice for 10 years. That would allow the members to live according to this law of the Church for the same length of time. And this experimenting period was about to end.

Mary Kesorn Chaikaew, the General Moderator, acting as the highest Superior of the Institute, announced the assembly of the 4th Extraordinary Chapter. This opened a new page to the history of the Institute, a time to renew the spiritual life of the members.

At the same time, this was an opportunity for the chapter members to study deeply and earnestly the Constitutions and Regulations in order to implant memories, revive the culture and beautiful customs of the Institute, allowing these to take roots in the life experiences and spirit of the Institute, trying to let this grow strong in the life of each member. This was also a revival of the charism the Holy Spirit gave to the Church through Fr Carlo Della Torre, SDB, the founder of the Institute, who consecrated this “Daughters of the Queenship of Mary Immaculate”, the first Institute under the guidance of the local Diocese.

Another important purpose of this assembly was to request the final certification of the Constitutions and Regulations of the Institute from the local ordinary of the Archdiocese of Bangkok where the centre of the Institute is located.

The Constitutions and Regulations of the Institute is a manual for the life and mission of the members to live the way of love for God and neighbours. This is also a spiritual treasure from the customs and life of the Institute. This is, therefore, an instrument in order to lead a life of holiness and perfection in the love of Christ. Thus, the Constitutions and Regulations tie the members to its practice, which the members have freely chosen to join, and an answer to God who has called with a special love.

The Secular Institute of the Daughters of the Queenship of Mary was founded by the Servant of God - Father Carlo Della Torre, the Italian Salesian missionary. He passed away on 4 April 1982, and is presently in the process of beatification and canonization. At present, the Institute has 8 communities, with 40 members. They are present in the dioceses of Bangkok, Surat Thani, Ratchaburi, Nakorn Ratchasima and Udon Thani. This Institute became a member of the Salesian Family on 12 July 1996.