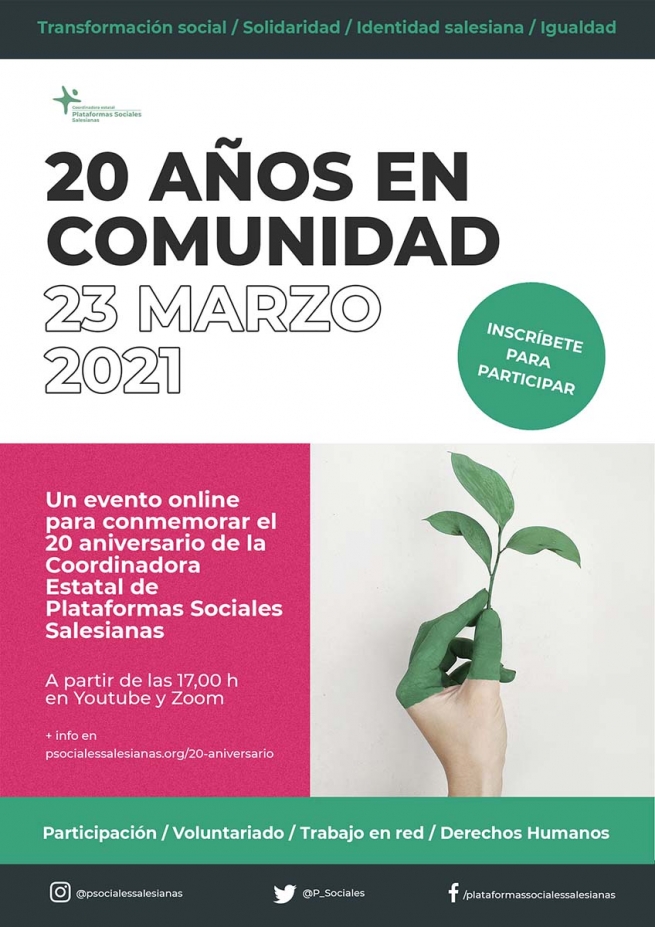 (ANS - Madrid) - The State Coordination of Salesian Social Platforms was created in 2000 to coordinate the ten social entities of Salesians and Daughters of Mary Help of Christians (FMA) of Spain that promote the social inclusion of vulnerable children, young people and families through integral education. Twenty years later, it can still be said that the Coordination has preserved the spirit in which it was originally conceived and that, through the projects of the various Platforms and in their various fields of action, it continues to give effective responses for integration, socio-work integration and the integral development of its beneficiaries.

To celebrate the 20th anniversary and to share the experiences of these 20 years already covered, an online event is scheduled this afternoon at 17:00 (UTC + 1), visible on the YouTube channel of the Salesian Social Platforms. Anyone who wants can join the celebration through Zoom after registering at: www.psocialessalesianas.org/20-aniversario

The appointment will see the musical accompaniment of the singer-songwriter Javi Quirós and the interventions of the President of the State Coordination of Salesian Social Platforms, Paco Estellés, of the SDB, and FMA Provincials of Spain - Fr Ángel Asurmendi (SMX), Fr Fernando García (SSM) and Sister María del Rosario García (SPA) - and of Fr José Miguel Núñez, Director of the National Salesian Center for Youth Ministry. On the occasion, it will also be possible to hear the testimonies of some educators and managers of the services of the Salesian Social Platforms, who will illustrate the meaning and implications of their initiatives.

Looking back over these 20 years, it can be seen that the Coordination has offered more than 40 days of formation and meetings for educational agents and volunteers, to qualify and improve the educational intervention.

We can recall specific initiatives and projects, such as “Toma las Riendas” (Take the reins), which has been running for 8 editions and which aims to promote the development of healthy youth spaces for the prevention of addictions.

Also noteworthy is the magazine En la Calle, born in 2005 on the initiative of the “Fundación JuanSoñador”, but which since Issue 35 of September 2016 has been promoted by the Coordination of Platforms. It aims to make known and denounce the situations of vulnerability and social exclusion of children and young people, and offers support to the ongoing formation of those who work in this field.

Also, a Child and Vulnerable People Protection System was developed, aimed at preventing, detecting and taking action against any form of violence; since 2018, the program of full reception and socio-working accompaniment of young people between 18 and 26 years of age seeking international protection and refugees has been active; and in 2019 the consultancy program for the juridical-legal orientation of the migrant population began.

During these years the State Coordination of the Salesian Social Platforms has always raised its voice in defense of the human rights of those who have no voice, working daily at the service of the more than 50,000 beneficiaries who pass through the 400 projects of the Social Platforms of the Salesians and the Daughters of Mary Help of Christians of Spain every year.