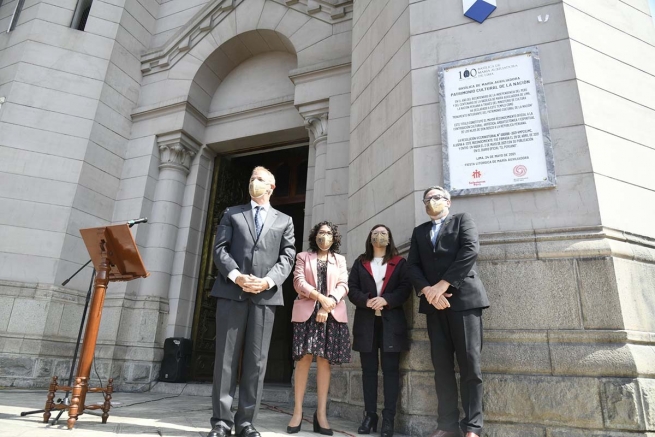 (ANS - Lima) - On the occasion of the Feast Day of Mary Help of Christians, last Monday, May 24, the ceremony for the recognition of the Basilica of Mary Help of Christians in Lima as a Cultural Heritage Site of the Peruvian nation took place. The ceremony, held in the atrium of the temple, located in the Breña district, was attended by various civil and ecclesiastical authorities, including: Jorge Muñoz Wells, mayor of Lima; Leslie Carol Peña Urteaga, Deputy Minister of Cultural Heritage and Cultural Industries; Giancarlo Maria Curcio, ambassador of Italy to Peru; and Msgr. Juan José Salaverry Villarreal, auxiliary bishop of Lima.

The ceremony began at 10:30 local time. Official speeches were made by: Fr Manuel Cayo, Provincial of the Salesians of Peru; the Deputy Minister Peña Urteaga and of Cultural Industries; and the mayor of Lima. Subsequently, the central act of the ceremony took place, the unveiling of a commemorative plaque with the following text: "Basilica of Mary Help of Christians: Cultural Heritage of the Nation".

In the year of the Bicentenary of the Independence of Peru and the centenary of the Basilica of Mary Help of Christians in Lima, the Peruvian nation through the Ministry of Culture declared this temple "an integral monument of the Nation's Cultural Heritage".

This title is the highest official recognition attributed to the cultural, artistic, architectural and spiritual contribution of the Sons of Don Bosco to the Peruvian Republic.

The UNESCO Blue Shield emblem was also inaugurated in the front of the Basilica, an emblem created by the United Nations Educational, Scientific and Cultural Organization (UNESCO) through the Hague Convention of 1954, which aims to identify those immovable cultural assets that enjoy special protection.

With this emblem, the status of the Basilica of Mary Help of Christians of Lima as a cultural heritage site has been officially and internationally validated.

At the end of the civil ceremony, the authorities entered the Basilica for the celebration of the Eucharist for the liturgical feast of Mary Help of Christians, presided over by Msgr. Salaverry Villarreal.

All these acts were carried out in strict compliance with the anti-Covid safety protocols established by the authorities of the State and the Archdiocese of Lima.