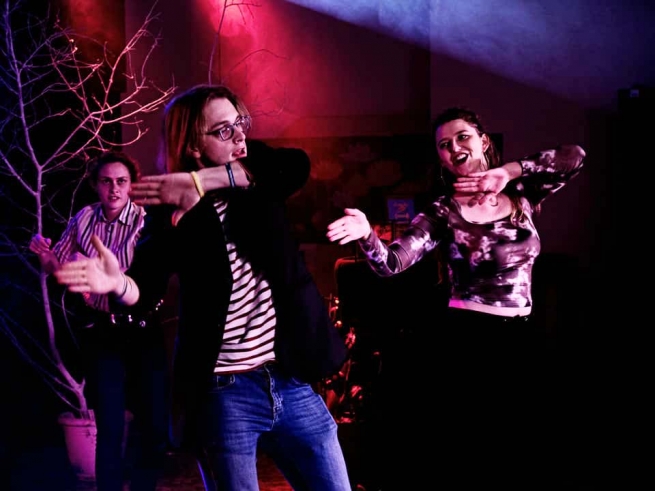 The jury, made up of 5 people from different backgrounds, had organized two evenings to view all the competing short films and get to know each team in person. The final deliberations were not easy, given the very high quality level of the films and also because of the many conversations with the young people, who witnessed the beauty of participating in this festival: many praised the bonds created during this experience, the learning received in teamwork, the atmosphere created in the class, in the group, the changes brought about by this magnificent adventure ...

After an evening well conducted by the two presenters and interspersed with amusing skits, with the young people who, despite the distances and the screens to mediate, participated with great confidence and joy, the prizes were awarded.

The Audience Award went to the "San Pedro" Salesian Institute in Seville, Spain, for the short film "Why not". Marcos, who lives among pleasures, friends, parties and social networks, has a meeting that makes him embark on a different path.

The Jury Awards went to:

The Award for the best soundtrack went to the “Costa de Beauregard” boarding school, Chambéry, for the video “The Pressures”. Aurore dreams of becoming a figure skater, but her parents encourage her to study hard, instead, to ensure her professional stability.

The “Thunderstruck” award went to the Campus de Pouillé, in Les Ponts de Cé, for the short film “The editorial board”. Tom is a second-year secondary school student in a farm and shares a passion for agriculture with his friends Simon and Florentin. During a French lesson, the teacher asks them to develop a theme letting their imagination run wild.

The “A nod to creativity” award went to the “San Pio X” children's home in Domont, for the video: “Traveling in search of happiness”. Two Pakistani teenagers try to integrate in France.

Finally, the Marseille team was awarded a special prize for loyalty, having participated in all editions of the Festiclip.

It is possible to relive the evening and watch all the films by visiting the website: https://www.festiclip.eu/