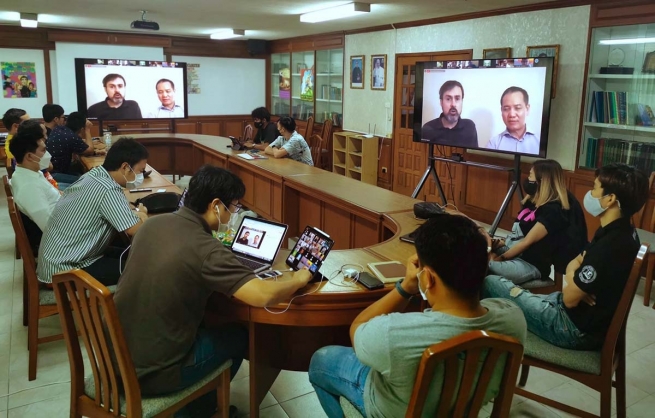 (ANS – Kolkata) – The 12th Asia-Oceania online Regional Congress of Don Bosco Past Pupils marking the 150th anniversary of the World Association of Past Pupils concluded on June 26, 2021. The two-day event focused on Salesian Delegate, Young Past Pupils and Networking. Delegates and members from 23 out of 28 countries of the region participated. First-timers included participants from Bangladesh, Nepal, Mongolia, Solomon Islands and Sri Lanka.

With the theme, “Moved by the Spirit,” the Congress brought together some 120 registered delegates on the Zoom platform, including 40 Salesians and 3 Salesian Provincials from Australia, Indonesia and Thailand. Also participating were Regional Councillor Father Joseph Phuoc and more than 1,500 views of the LIVE Congress streaming in six other languages on the YouTube channels.

The world President Mr Michal Hort from Slovakia, Kolkata based World Councillor for Adult Past Pupils of Asia-Oceania Mr Rajesh Gupta, Mr Sergio Rodríguez López-Ros (Europe-Spain) and Br Dominic Nam, SDB (World Confederation Delegate) offered fresh Salesian spirit inspiration to all participants. The 'breakout group sharing' on the Zoom platform with 17 mixed groups (June 25 and June 26) deepened the common bonds and ironed out the challenges for more effective communication and networking with Young Past Pupils (GEX) groups around the 28 countries.

“Probably never before, the rich sharing of a Past Pupil Congress is so much clearly available to all members: about 40 videos (reports, situation, activity, culture) coming from 15 different countries,” said former East Asia Oceania Regional Councillor and Congress facilitator Father Vaclav Klement. All these materials are available on the Boscolink in text and on the GEX-EAO FB page in video format.

The resolution of the Congress include the Role of delegate in animation and formation; Starting past pupil association in new areas; Networking among the past pupils; Making use of digital platforms; Forming business chambers; Creating a sense of belonging to the Salesian Family; Organizing activities for Young Past Pupils.

Moreover, amazing was the Thai creativity (taking advantage of their SF Days 2021) to gather their GEX (Young Past Pupils) in two venues - Bangkok and Haat Yai to follow in this event physically.

Among the long list of volunteers mentioned were translators in 8 countries, IT groups in Japan, Thailand and the Philippines, delegates and past pupils who prepared inputs in video format, and keynote speakers during three sessions of 3-hour segments over two days, messages, recap and synthesis, goodnight, and prayers.

“It was really very interesting and good Congress, an inspiring experience. We are encouraged on our journey as Don Bosco Past Pupils amidst all challenges,” said a Past Pupil from Mongolia.

Another note in the WhatsApp group said, “Hope some of you who watched the meeting on YouTube will try to be in the innermost circle of the Association. Helping another young at risk. Let the work of DB continue through you.”