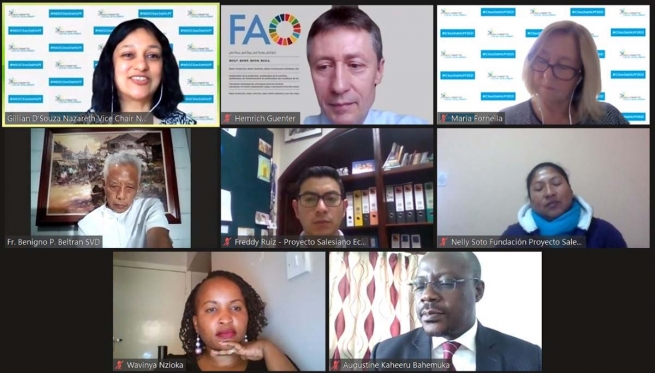 (ANS – New York) – Participating virtually from Ambato, Nelly Mariana Soto Guanolusia from “Fundación Proyecto Salesiano”, Ecuador, presented the organic farming initiative of her commune that addresses the issue of poverty and hunger.  She said that this project also integrates the work for children on the street into its overall goals and objectives.

Nelly was speaking at one of the more than 250 official side events being held during the High Level Political Forum 2021. The Forum - discussing the theme: “Sustainable and resilient recovery from the COVID-19 pandemic that promotes the economic, social and environmental dimensions of sustainable development: building an inclusive and effective path for the achievement of the 2030 Agenda in the context of the decade of action and delivery for sustainable development” - began on July 6 with H.E. Mr. Munir Akram, President of the Economic and Social Council presiding over the inaugural session.

This side event held on July 7, titled “Breaking the Cycle of Poverty and Hunger, Our Asks”, was organized by the NGO Committee on Social Development of which Salesian Missions is a member.

Ably supported by Freddie Ruiz, the project coordinator at “Fundación Proyecto Salesiano”, Nelly explained how their commune has benefited from this project that trains and supports the mothers of children from the street in organic agriculture. The commune operates as a cooperative farm. Selling their produce in the local markets gives them a good return for their effort and this has helped them come out of poverty and hunger. Empowerment of women and integrating the rehabilitation of children into the project are other important elements of the initiative.

Ms. Wavinya Nzioka, an SDG Champion from the rural Makueni County in Kenya and a network partner of Don Bosco Developmental Office, Nairobi, introduced to the committee by Geoffrey Ngui, the Job Placement officer of DBDON, explained the vision of her project: Vertical Kitchen Garden. She sees in it a sure way to address the issue of hunger and malnutrition among the poor in her region. She has set a target of reaching out to 15,000 households with this innovative method of cultivation. Her policy asks were clear – the government of Kenya need to enhance the budgetary allocation for agriculture and mainstream her effort and scale up the project, make it easier for women, particularly those with disabilities, to access loans for their livelihood projects. This was endorsed by both Mr. Henrick Guenter who spoke on behalf of FAO and Mr. Augustine Kaheeru Behemuka, speaking on behalf of UNDP. Fr. Benigno P Beltran SVD, President and CEO of Sandiwaan Centre for Learning, presented his very ambitious project that has plans to plant a billion bamboo trees, both as a measure to combat climate change and to develop a nature-based economy to combat poverty.

This report will be incomplete without acknowledging the role of Angel Gudiña, of “Misiones Salesianas”, Madrid, and Lina Varon, of Red America Social Salesiana (RASS), who identified the project in Ecuador as a good practice for this side event.

It should also be noted that next Monday, 12 July, at 13:30 (UTC + 2), another Salesian experience - the Ecole Normale Technique (ENTEC) of Fleuriot-Tabarre, in Haiti, will be presented as a good practice in the official program (HLPF) of the United Nations during the side event "Faith without Borders", organized by the NGOs "REDES" and "Justice Coalition of Religious" (JCoR). The event, which can be followed in live streaming in English, French and Spanish, will see the Salesian missionary Andra Mytilien participating.

Salesian Mission’s Representative to the UN