Peru – Mary Help of Christians Basilica: “A sign of friendship”. Eucharist for closing of temple's centenary and presentation of commemorative book
Featured 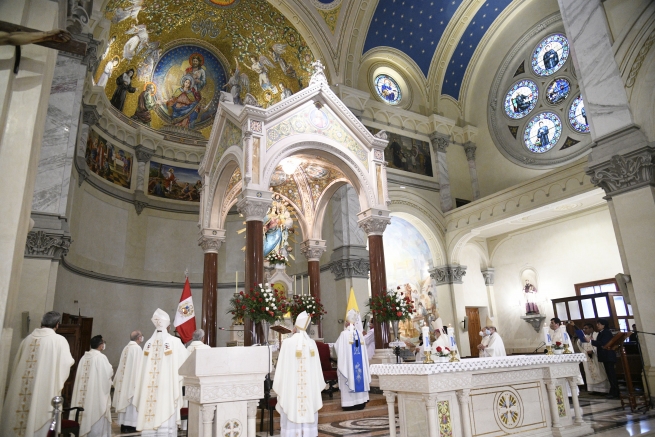 (ANS - Lima) - The jubilee year for the centenary of the Basilica of Mary Help of Christians in Lima officially ended with the Eucharist on Sunday 1 August, presided over by the Archbishop of Lima, Msgr. Carlos Castillo, accompanied by the Apostolic Nuncio in Peru, Msgr. Nicola Girasoli, and by the auxiliary bishops of Lima, Msgr. Guillermo Cornejo and Msgr. Guillermo Elías, as well as several Salesians of Don Bosco. The Mass, officiated in the temple and also broadcast live, also saw the presence of the Daughters of Mary Help of Christians and a number of ecclesiastical and civil authorities, and was celebrated in an atmosphere of joy and gratitude.

“Since its inauguration this basilica has been dedicated to honoring its status as an offering to the homeland. Over the course of a century, it has hosted masterpieces of religious art that synthesize and express the faith of the Peruvian people. Furthermore, the Basilica has been and continues to be a center of communion and mission, a center of Christian and Marian life,” said Fr Manuel Cayo joyously, the Provincial of the Salesians in Peru, in his welcome address.

Msgr. Castillo expressed words of gratitude to the Salesian Family. "Thank you, Salesian brothers and sisters, for having accomplished this work, which is an enormous and precious sign of friendship. Many generations have been formed in your activities of ministry and we have had beautiful experiences of people who have assisted and accompanied us as Don Bosco and Saint Dominic Savio did in accompanying the poor and young people of Turin.”

Because of this important anniversary, another moment of celebration had already been planned from the afternoon of Friday 30 July: the presentation of a commemorative book on the basilica's 100th anniversary.

The architects of this great work took part in this appointment: Walter Fajardo Olivares, in charge of the literary work; dr. David Franco, Historian of the Congregation; Fr Santo Dal Ben, parish priest of the parish of Mary Help of Christians; and Fr Cayo.

"It is a tribute that we want to offer to all the Peruvian people who in these 100 years have found in the Basilica a house of celebration, a house of mission, a house of communion," Fr Cayo emphasized. Fajardo Olivares said he was delighted to have been part of the team that produced the book. "This book is an important contribution to knowledge, not only of the Basilica, but of all the religious art and architecture of republican Peru," added Dr. Franco in his speech.

Other speeches were by Prof. Martha Barriga Tello, and Dr. Nanda Leonardini Herane, both of the "National Major University of San Marco", who underlined the artistic value of the Salesian temple, mentioning and detailing each of its pieces. Special guest of the evening was Cardinal Pedro Barreto Jimeno, SJ, Metropolitan Archbishop of Huancayo, who underlined the great religious significance of the basilica and the contribution of the Salesian charism to the Peruvian faith.