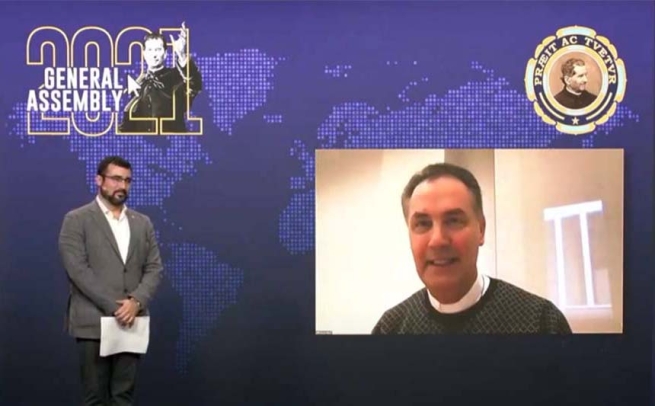 (ANS - Rome) - Over the past weekend, from 26 to 28 November, the General Assembly, the most important meeting of the World Confederation of Past Pupils of Don Bosco, which occurs every six years, took place online. On the occasion, the World Presidency was also renewed, which since yesterday has been entrusted to the leadership of Bryan Magro, Maltese Past Pupil, the current Economer of the Confederation.

The General Assembly is a moment dedicated to common reflection, sharing from the regions, updates and the plan of action for the future. Over 150 delegates registered to take part in the event.

The assembly was conducted in three afternoon sessions of over three hours each. The first day, Friday, November 26, it began with a prayer, animated by young people from the Philippines, the Solomon Islands, Hong Kong, Japan, and Indonesia. Two recorded video messages by Fr Joan Lluis Playà, Central Delegate of the Rector Major for the Secretariat of the Salesian Family and Bro. Dominic Nam SDB, World Delegate for Past Pupils were presented. This was followed by a brief and lively message of the 10th Successor of Don Bosco, Fr Ángel Fernández Artime, directly from Valdocco, which was much appreciated by the assembly.

After thanking the outgoing President of the Confederation, Michal Hort, and his collaborators, he greeted the Past Pupils with the message that Don Bosco gave to all the children who were leaving his Oratory towards their future: "Remember that here at Valdocco you will always have a friend and father." He manifested his awareness of the power, strength, energy of Ex-DBs in the world. And for this he exhorted them: "You must be an ever-living force in the society!"

He also recalled Don Bosco's message, which maintained that every Past Pupil is called to be an honest citizen and a good believer, is as relevant as ever. And, lastly, he encouraged the Delegates to always stand with their hands held out in order to welcome and help the poorest and most needy.

The second part of the first day was dedicated to the presentation of the reports from the 4 regions in which the Confederation is structured: America - Africa - Asia and Oceania - Europe, with some reports also from the national Federations (Malta, Italy & Haiti). Thanks to these reports it was also possible to admire the richness of formation and communion in the American continent, as well as the dynamic solidarity with the poor, especially during the pandemic, of the Asian federations. The many projects carried out with the support of the European Union along with initiatives for young people in Malta were also well high lighted in the reports.

The main day, Saturday 27 November, was dedicated to listening to the reports of the President, the Economer and the Secretary General together with the presentation of the proposed amendments to the Statutes and preparing for the next day's voting process.

Finally, on Sunday 28, after the Eucharist presided over by the Rector Major at 9.30am at the Basilica of Mary Help of Christians at Valdocco, (which was live cast through social media and Tv Rete 7) the elections took place, at the end of which the Rector Major announced that the new President, and 11th Successor of Carlo Gastini, was Bryan Magro.

The new governing body of the Confederation is thus as follows: