Belgium – Our hope for Europe: Conference on the Future of Europe
Featured 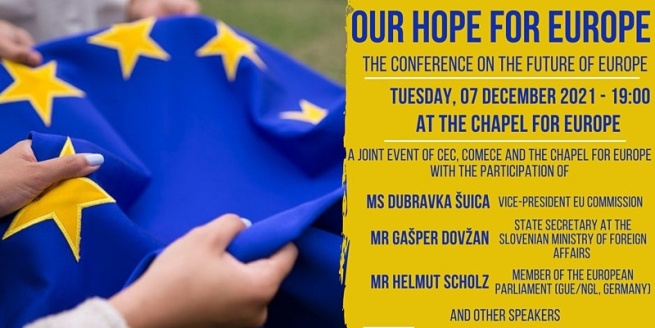 (ANS – Bruxelles) – The event “Our hope for Europe: Conference on the Future of Europe” will be held on 7 December 2021, 19:00 – 21:00 (CET) at the Chapel for Europe, Brussels, Belgium. The Executive Secretary of Don Bosco International, Mr Renato Cursi, is joining the conversation in the event’s second session. The event is part of the churches’ contribution to the ongoing Conference on the Future of Europe.

The event on December 7 is jointly organised by the Conference of European Churches, the Comece – the Catholic Church in the EU and Chapel for Europe.

European Christian citizens will also share their reflections on the theme “What is my hope for Europe?” representing diverse age groups and geographical regions of Europe. Among the contributors will be Mary Killoran from Ireland, Bishop Robert Innes from the Church of England, Renato Cursi, Executive Secretary of Don Bosco International (DBI) and Very Rev. Archimandrite Aimilianos Bogiannou, moderator of the Committee of the Representatives of the Orthodox Churches to the EU (CROCEU).

The conference will be held in a hybrid format, although physical participation is possible with the COVIDSafe app and applicable measures.

Participants are invited to take part in the discussion.

For participation in physical presence