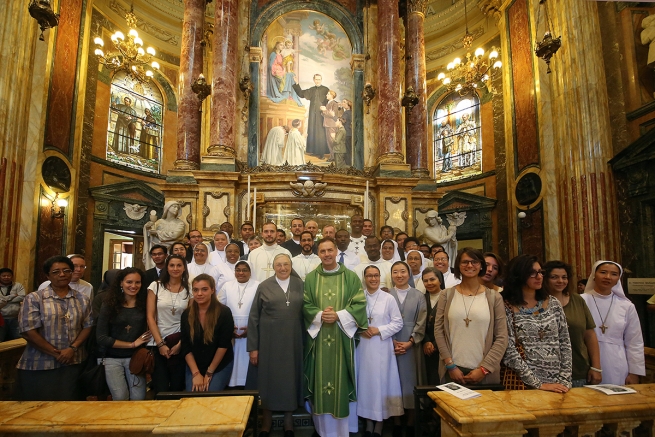 (ANS - Turin) – Yesterday, in the Basilica of Mary Help of Christians, the Rector Major, Fr Ángel Fernández Artime, launched a strong appeal for a renewal of the missionary spirit in the style of Don Bosco. He was speaking to the 46 members of the 147th Salesian Missionary Expedition: "We are heirs of a tradition in our Salesian Family that is more than century old,” he said. “Be courageous heralds of the boundless mercy and generosity of God especially among the poor and needy."

The solemn Mass was concelebrated by Fr Francesco Cereda, Vicar of the Rector Major, Fr. Guillermo Basañes, Councillor for the Salesian Missions, 11 Salesian Provincials who were present in Turin for their mid-term meeting with the Rector Major and his Vicar, and many other Salesian priests. Also in attendance were Mother Yvonne Reungoat, Mother General of the Daughters of Mary Help of Christians (FMA), and several other members of the Salesian Family.

In the homily of the Mass the Rector Major said that the missionaries must first share with others the humanity they received from their families and their culture and that has been nourished daily in a trusting relationship with the Lord.

They are also to share the joyful witness of a lifestyle based on Christian mercy and brotherhood, a message of peace and development, forgiveness and fraternity in many different situations of suffering in the world.

Then they are to make a preferential option for the least, the dispossessed, those most in need, to help them in all kinds of necessity. While at the same time proclaiming the Good News, as we have learned from Don Bosco. And they also serve those who are not poor. "Help them to save their lives by opening their hearts to service of the least."

Finally, the Rector Major recalled that the root of the missionary life is in a fruitful relationship with God. He entrusted all the new missionaries to the protection of Mary Help of Christians.

After the homily, the Rector Major and Mother Reungoat handed a crucifix to each of the departing missionaries: 18 Salesians, 19 FMA, and 9 volunteers (8 female and 1 male) who are being sent to witness the mercy of God to their brothers and sisters in the mission ad gentes.

Numerous photos are available on ANSFlickr.