Belgium - "Don Bosco Mission" at the Institute of Tournai
Featured 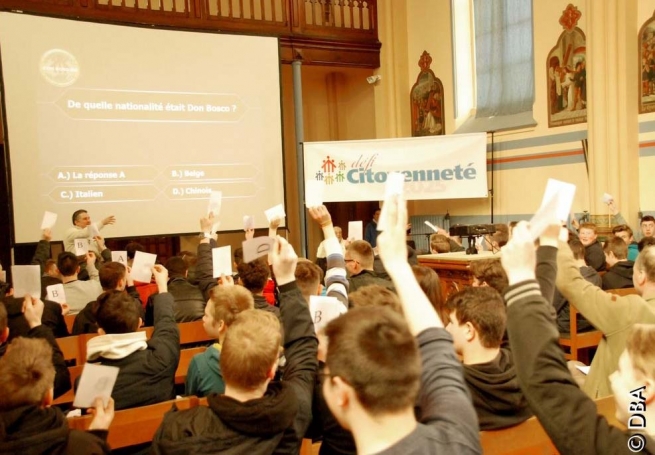 (ANS - Tournai) - At the end of March students of the Primary School and Secondary Technical-Vocational School in Tournai, Belgium, had two extraordinary days of animation, games and special moments thanks to the "missionaries": Salesians, Daughters of Mary Help of Christians (FMA) and the youth of the Salesian youth Movement (SYM).

On the heels of the Bicentenary Year the institute's director, prof. Dominique Henno, wanted to revive a proposal of the France-South Belgium Province (FRB): to create a Salesian mission in the school of Tournai. The project gradually took shape around the theme of happiness, remembering the words of Don Bosco: "I have only one wish, to see you happy."

The organizers wanted to encourage as much as possible contact between the students and visiting Salesians and FMA. For this it was important that each class could have a significant time to meet them. In particular, it was meant to attract the attention of the first and second year students of secondary school (12-14 years), and they were given an entire day.

"For a school like ours, that no longer has a religious community within its walls, this presence of Salesians and Salesian Sisters for two days was a bit like as if it was Don Bosco himself visiting us," said the Headmaster. After the launch, in the school chapel, each class had the opportunity to meet a couple of consecrated Salesians who gave their testimony and exchanged ideas.

A big surprise for the younger students, was the appearance of the clown "Papi" - played by the Provincial Fr Daniel Federspiel.

The festive Eucharist brought together young and old, students and teachers, past pupils and organizers. During the day, several pastoral workers gathered for a debate on the subject: "how to speak about God to the youth of today?".

The success of this mission, however, relied heavily on another factor: the involvement of the older students from the school (aged between 16 and 20), who are members of the pastoral group "Agape," committed to the formation and animation of the younger ones.

"This Salesian mission reminds us that pastoral ministry must be at the heart of the school if we want our schools to work well,” said Professor Henno. It is also important to involve the young people. "When we show them we have confidence in them, we are rarely disappointed," he added.