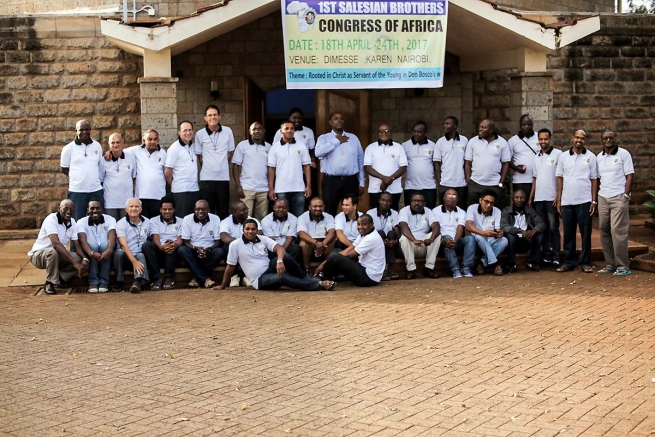 (ANS – Nairobi) – The first ever Salesian Brothers Congress of Africa and Madagascar was held at the Dimesse Sisters Spirituality Centre in Nairobi, East Africa Salesian Province. Thirty-three Salesian Brothers and 4 Salesian Priests took part in the Congress that started on 18th of April and ended on the 23rd of April. The Thame of the Congress is “Rooted in Christ as Servant of the young in Don Bosco’s way”.

Fr. Eric Mairura, the Provincial Economer of East Africa Province (AFE) welcomed the Salesians during the opening ceremony that was presided by Fr. Americo, the Regional Councillor for Africa and Madagascar.

During the week long Congress there were deliberations and discussions on various topics such as:

•        The Brother in the eyes of Don Bosco and in the development of the congregation,

•        The document the ‘Identity and Mission of the Religious Brother in the Church’,

•        Salesians Brothers in Africa and Madagascar:  the gift, the challenge, the promise... A look at the past, the present and the future’

•        And a concluding Address by Fr. Fr Ivo Coelho, General Councillor for Formation.

The Congress has been organised by the Brothers spearheaded by Br. John Njuguna, Br. Walter Thyrniang and Fr. Silvio Roggia with the support and collaboration of other Brothers, the CIVAM with the blessing of the Rector Major and the General Council.

This gathering provided the participants enough thought, reflection and discussion on the vocation of the Salesian Brother today. The Congress came up with a Final Statement of the Resolutions of the Congress and also the Rector Major attended the meeting on final day of the Congress.

This gathering of the Brothers from Africa and Madagascar is foreseen to have beneficial ripple effect on the Region in areas of Vocation Promotion, identity and visibility of Salesian vocation. The event could be seen as a combination of ongoing formation and sharing of vocation journey among brothers. The Brothers also Elected Delegates for future coordination with the hope that the Congresses will be held regularly in the Region.