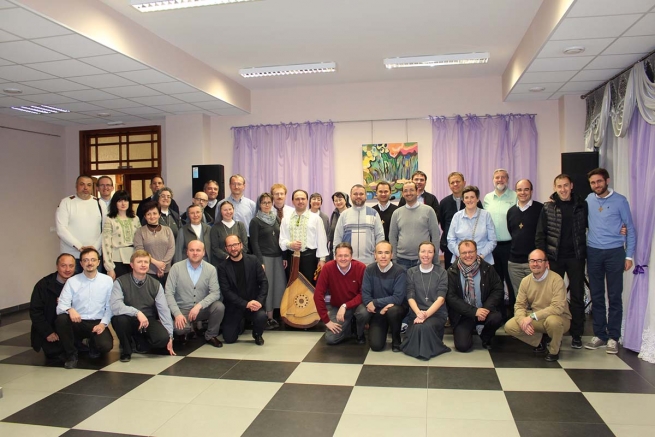 (ANS - Lviv) - From 27 to 29 April, more than 20 Provincial Delegates for Schools of the Salesians and Daughters of Mary Help of Christians from Europe met in Lviv, Ukraine, to retrace developments that have taken place from 2010 to the present. It was seen that the operative choices made were in accordance with the magisterium of the Congregation and the Institute and in response to the Church.

Secondly, the meeting offered an opportunity to study the Post-synodal Apostolic Exhortation Amoris Laetitia, its internal articulation and some generative themes that can enlighten the educational-pastoral practice in European schools.  It was seen that according to this exhortation the family is at the same time subject and object of the Church’s pastoral ministry, and is assisted through accompaniment, discernment and integration. Chapter VIII of the Exhortation was read in this light as a synthesis of this approach. In addition, some practical elements were emphasized to be considered in pastoral action: catechesis, preparation, celebration, and support.

Then there was some sharing on the formation given to teachers and school leaders at local, provincial or national level in Europe. A proposal was presented for a questionnaire addressed to Salesian school directors, entitled "EDUCO BAROMETRO", which will be launched in the last quarter of 2017. The main objective of the questionnaire is to obtain information on the perception of Salesian school directors on a variety of issues: their work, the school and the educational and pastoral mission that is being carried out, and other socio-educational issues.

The meeting was considered enriching and of great help to everyone, and the variety of contexts and countries was a great resource. The presence of the Provincial Coordinators at the meeting was very important to ensure the implementation of the processes developed at provincial level, to share roles and strategies and to deepen the Salesian identity of the schools.

There is still much work to be done in the European school: "School Europe" is not just a slogan, but rather a programme to be implemented together.