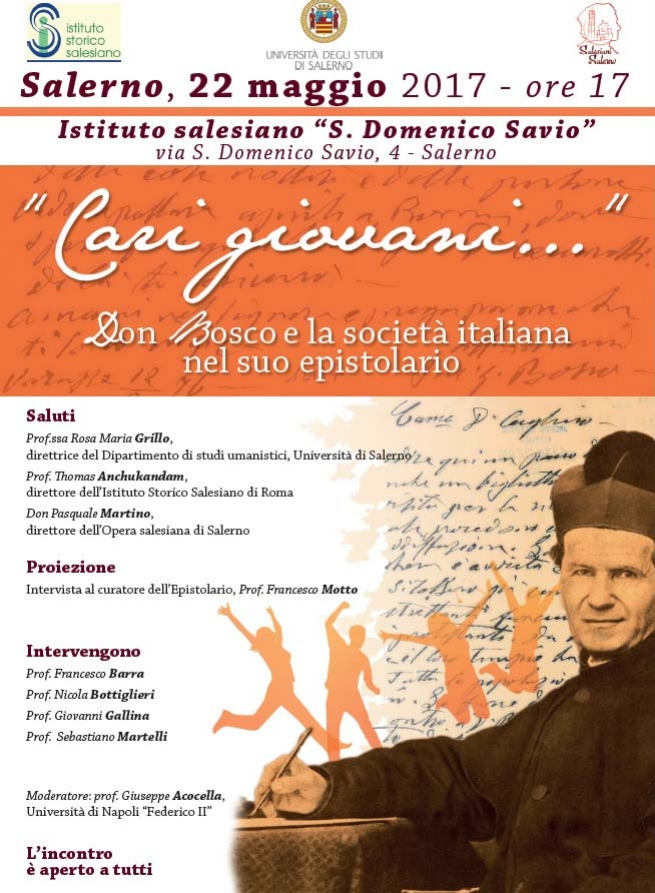 (ANS - Salerno) - The Department of Humanities at the University of Salerno took on the task of the first public launch of the critical edition of the letters of Don Bosco, published in the "Fonti" series of the Salesian Historical Institute (ISS) in Rome. Over the space of about 30 years, Fr Francesco Motto, the editor of the ten large volumes (the eighth and third-last volume is in print), has managed to personally recapture  from all round the world almost five thousand published and unpublished letters which he has collected and put in order, and then published in chronological order with all the historical-linguistic information useful for their correct understanding.

From now on, recourse to these letters will be a necessary requirement for anyone wishing to re-write the life of Don Bosco, to better understand his educational method, and his spirituality. His correspondence with civil and religious authorities is also an open window on nineteenth-century society, the Risorgimento, the Church-State conflict, the Catholic response to rampant secularism, popular and youth education, school and leisure education, and the transition from spoken dialect to written Italian.

If the politicians of the time made Italy, Don Bosco made his contribution to making the Italians and not only the Italians, since the letters of the saint crossed national boundaries to reach France and Spain and, above all, Latin America, in the wake of the missionary relaunch of the Church of the time. The masses of Italian emigrants in Argentina and the unknown land of Patagonia where the indigenous people wandered, become the point of reference of Don Bosco's letters to the President of the Republic, the country's highest religious authorities, as well as of course the dozens of very young and enthusiastic Salesian missionaries sent to save "bodies and souls" of the people at "the end of the world" as Pope Francis would say.

The Salesian house in Salerno, in the city centre, will host a round table discussion on 22 May 2017, at which teachers from various southern Italian universities will speak.