Italy - Celebrations for the 100th anniversary of the VDB
Featured 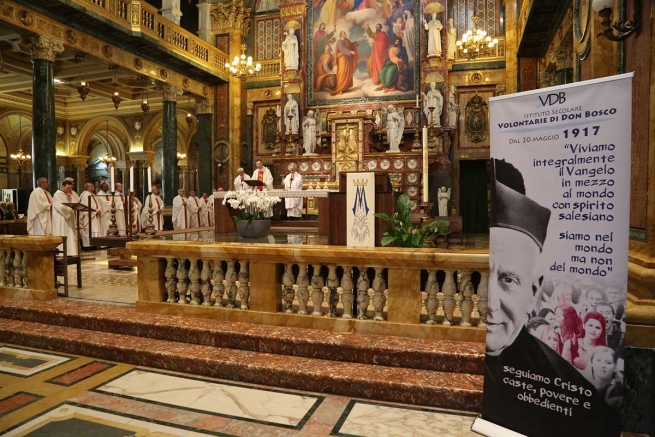 (ANS - Turin) - The Institute of the Volunteers of Don Bosco (VDB) celebrated its centenary just where the Institute was born: in Turin Valdocco.

A large group of volunteers - coming mainly from Italy, but even from various nations of all continents, representing more than one thousand two hundred VDBs living in 58 countries throughout the world - met on Friday evening, May 19, with World President Olga K. for the Eucharistic celebration presided over by the Central Assistant of the Institute, Fr Joan Lluís Playà, which was followed by a prayer vigil at the Don Bosco’s Rooms.

On May 20, the Volunteers lived various intense and participated moments of prayer, reflection, sharing and deepening on the origins and history of the Institute, starting from the first gathering of three women on May 20, 1917 under the leadership of Fr Filippo Rinaldi, who has been since 1922 the Third Successor of Don Bosco and today venerated by the Church as a blessed.

Fr Á.F. Artime on the occasion presented the letter that he addressed to the Volunteers in the Centennial of the Foundation of the Institute, by highlighting, among other things, the "Salesian charism" of the VDB and their being a living part of the Salesian Family.

An artistic performance was then proposed: by using music, dance and words, have been told some of the key moments of Fr Rinaldi's life and his intuition of the possibility of living the consecration while remaining in the world.

As just the Rector Major recalled, one hundred years of history cannot be merely the fruit of a human program: they are the evidence of God's will, and for this reason, the VDB festival is a great feast for the whole Salesian Family: culmination and center of the feast was the Eucharistic celebration, presided over in the Basilica of Mary Help of Christians by the Rector Major and concelebrated by Cardinal Joseph Zen Ze-kiun, the Emeritus Bishop of Hong Kong, by the Superior of the Piedmont and Valle d'Aosta Special Circumscription, Fr Enrico Stasi, and by many other Salesians.

Many photos are available on ANSFlickr