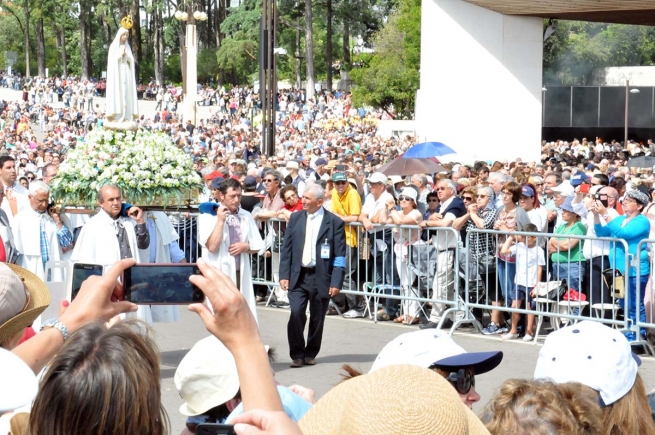 (ANS – Fatima) – Hundreds of pilgrims of the Salesian Family (SF), gathered as per tradition at the Marian Sanctuary of Fatima, together with the boys and girls of the Salesian Youth Movement (SYM/MGS) who are meeting there to celebrate their National Day. This year the celebration was lived with even more participation than usual because of the centenary of the apparitions.

Just one week after the pilgrimage of Pope Francis to Fatima and the canonization of the two shepherd visionaries, Francisco and Lucia, on Saturday 20th and Sunday 21st of May, the 65th National Pilgrimage of the Salesian Family was held with the participation of about 800 pilgrims.

The programme of the pilgrimage followed the traditional phases of this appointment. At the Hungarian Calvary there was the Pilgrims’ Way of the Cross; then there was the procession from the High Cross to the Chapel of the Apparitions, where Fr. Joaquim Taveira, SDB, National Delegate for the SF of Portugal, guided a short prayer.

Soon afterwards, at the Paul VI Centre there was the show of art and faith “A Message – 100 Years”, animated by the youths of SYM/MGS, who were about 700 and were gathered in Fatima for their national meeting; all in all, the audience numbered about 2000 people.

Saturday evening was marked by the prayer of the rosary in several languages, a candlelight procession and, in the Basilica of Our Lady of the Rosary, by a prayer vigil that recalled the link between Our Lady and the Salesian Family and also the Centenary of the Volunteers of Don Bosco (VDB).

On Sunday morning, there was some more time for an exchange on the theme of the Salesian Family and its challenges, guided by Raúl Abad, World Councillor of Salesian Cooperators of the Iberian Region; a rosary, and the solemn concluding Eucharist.

It is also worth mentioning that, during their national gathering, the youths of SYM/MGS, besides performing a great evening show, also examined the event of the apparitions and the figures of the two holy little shepherds of Fatima; they commenced their exchange starting from the message delivered by Pope Francis during his pilgrimage to the sanctuary; and they talked in-depth of the motto of their appointment: “Identified with Mary”.