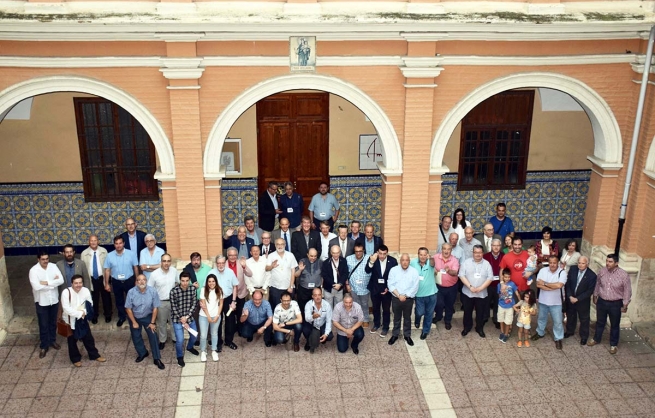 (ANS - Valencia) - The Spanish Confederation of the Past Pupils of Don Bosco begins its second century of life with the aim of opening itself up to volunteer work and sharing the Salesian mission.

From June 2 to 4, the Salesians of “Sant'Antonio Abate" in Valencia hosted the National Council of the Spanish National Confederation of Past Pupils of Don Bosco in its ordinary session for 2017, and for their extraordinary elective meeting.

On Saturday afternoon, the Council held its opening ceremony of the Confederation's Centenary. Indeed, it was on June 1917, at the inauguration of the "Pabellón del Milagro" in Via Sagunto in Valencia, that the representatives of sixteen associations of Don Bosco's former students from as many cities congregated at the Salesian school where they decided to organize themselves into the Spanish Federation, precursor of the current National Confederation.

Despite the distance, and via two separate videos, Don Ángel Fernández Artime, Rector Major of the Salesians, and Mr. Michal Hort, President of the World Confederation of Past Pupils of Don Bosco, congratulated the Confederation. All the speakers discussed the still current nature of the former pupils' movement, and pointed to the opportunity of centenary celebration not so much as an opportunity to remember the last 100 years, but as a chance to plan the years to come.

The session was attended by the Local Council of the Salesian Family, the Local Union, and a representative of the Association of Past Pupils of Valencia-Sagunto, as well as a large part of the local Salesian community.

Leading the meeting was the President of the Spanish National Confederation, Fernando Nunez Arce, who was re-elected as President for a new four-year term.

The President underlined the importance of returning to the roots of the Confederacy's birth, in Valencia, in fact, and to that founding act of June 1917, which showed  the courage of those who did not hesitate to take this step forward for the organization.

"Never, in a hundred years, has the confederation ceased to function," he said proudly.

Then he added: "We must re-form, re-establish ourselves; we must re-orient ourselves towards volunteering, and go outside ourselves, reach out to others, not just the ex-pupils. " "Let us take part in the Salesian mission," he concluded.